“There were three Empresses of Mars.”

So goes the first line of the book. It goes on to explain that the first was the only bar on Mars. The second was the lady who ran it. And the third was the Queen of England.

A Terra-forming project had begun in the twenty-second century. The British Arean Company had used every trick in advertising, dressing up old cliches and such, to get settlers interested in the project. They would take anybody interested, as well as various scientists in the disciplines necessary to get things going.

It was harder than expected and the company started hemorrhaging money. So the bureaucrats took over and began penny-pinching. Mary Griffith, a xenobiologist, had signed on to develop plants capable of surviving. When they were through with her, the company fired her. Never mind that she had three daughters and not enough money to return to Earth.

She opened The Empress of Mars, making her own beer, using barley bought from Clan Morrigan. The clan’s leader had a son with a disability, but he was also a genius. He developed small robot insects called biis(settlers had found bees imported from Earth wouldn’t fly) to pollinate the crop plants under the domes.

Manco Inca had been hired to design the plan for Terra-forming Mars and been fired when it was deemed to expensive. He worked now at the Empress.

While Mary was digging clay one day from her small allotment of land(her salary), she dug up a red crystal that some thought might be valuable, it was smuggled back to Earth past the BAC for assaying. It turned out to be a red diamond worth considerable.

That’s when new settlers started flooding in. Mars was the new Sutter’s Mill, drawing all sorts looking to get rich. As usual, they were drawing many types of people. Gamblers, conmen. Merchants looking to supply goods to the prospectors.

The British Arean Company was no longer a monopoly. They began scheming, not always legally, to get control of everything: the biis were especially valuable. But there were the diamonds(the uncontrolled flood was driving down the prices) as well. Not to mention the market goods.

This is the story of the little people struggling with the big boys for control of a suddenly valuable planet and its resources.

A quite good tale by Kage Baker. Though I have some of her Company novels, this is the first of her books I’ve read. I need to get to the others soon I suppose. If this one is any indication, neglecting her might have been a mistake.

The edition I have is by Subterranean Press, a small publisher of limited editions. It’s beautifully illustrated by J. K. Potter and signed by both author and artist. Tor is coming out with a hardcover in May.

I’ve had a run of luck lately coming across DVDs of favorite old films. SOUTHERN COMFORT was released in 1981 and it has probably been almost that long since I last saw it. 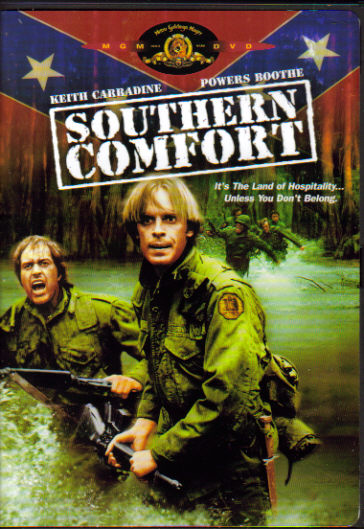 The Louisiana National Guard is having war game maneuvers in the swamps one weekendin 1973. A squad of nine men go on reconnaissance. The make-up includes only one real soldier(Peter Coyote), a high school football coach wound too tight(Alan Autry), a macho man(Fred Ward), a redneck, a drug dealer, a scared little man, a Sargent fond of spouting the manual, a city boy(Keith Carradine), and a recent transfer from the Texas Guard(Powers Boothe).

When they come to a point where there is a large body of water instead of the trail the map says is supposed to be there, they make a fateful decision. “Either go back and start over or follow along the bank looking for a place to cross.”

They come upon an encampment with several boats, but no one around. Taking the boats to cross the lake, they leave a note saying they will bring them back. once launched and paddling across, the Cajun trappers return to camp. While Coyote’s character tries to explain, the redneck opens fire on them as a joke(the automatic weapons are loaded with blanks). The Cajuns react as anyone would and return fire, Coyote’s Staff Sgt character killed in the action.

Thus starts a harrowing chase through the swamps.

Their next mistake comes when they find a cabin and take the owner prisoner(Brione James), assuming he’s one of the Cajuns they’d already encountered. The too tight coach blows up the man’s home with dynamite found there.

After that, things fall apart big time. The manual quoting Sargent doesn’t inspire a lot of confidence as they run. The only two that seem to have any sense or sympathy for the Cajun prisoner is Carradine and Boothe. All want to get out alive, but you just know that most of them won’t.

The film was directed by Walter Hill and the music was done by Ry Cooder. There is one nice sequence in a Cajun Community that has some good music and it showcases the people of the swamps. No different, basically, than anyone else. Don’t mess with them and they can be friendly and welcoming. But give them cause…

A nice little action film. It’s where I first became aware of Powers Boothe and have been a fan ever since, especially the Philip Marlowe HBO series he did a few years later.