I’ve been tagged by James Reasoner and I’m going to try to participate.

Here are the rules:
You must include the person who gave you the award and link it back to them.
You must list five of your fabulous addictions in the post. You must copy and paste these rules in the post. Right click the award icon and save to your computer then post with your own awards.
Here are five fab blogs.
http://pattinase.blogspot.com
http://jeff_mariotte.typepad.com
http://daytonward.livejournal.com
http://www.barryeisler.com/blog.html
http://whatever.scalzi.com

I would urge you to try any of the blogs off to the right. They are all very good reading. 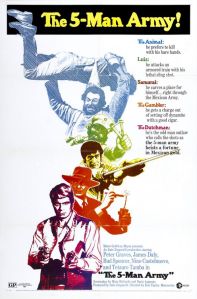 This movie was released in 1970 and I immediately dubbed it a western Mission Impossible, not just because it starred Peter Graves. The release date was at the height of the show’s popularity and the plot was straight out of it.

It is set in a period during the Mexican revolution begun in 1910, probably late in the conflict around 1915.

Peter Graves plays the Dutchman, an American hired to steal a half a million in gold dust from a crooked Mexican general for the revolutionaries.

He brings a group of his old comrades together, each with a particular skill set. Mesito(Bud Spencer, he of numerous westerns with Terence Hill) is a strong man/bank robber with 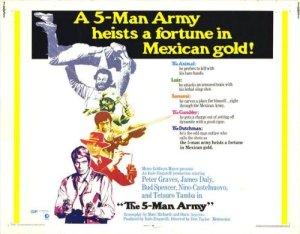 a knowledge of railroad construction. Captain Augustus(James Daly), an old war buddy, is a gambler these days and an expert in the use of dynamite. Samurai(Tetsuro Tamba), a Japanese expert in the sword and knife work, he doesn’t talk much. Luis Dominguez(Nino Castelnuovo), the youngest of the five, is an ex-circus acrobat, now a bank robber.

The elaborate plan devised by the Dutchman involves robbing a train. Such a train.

The plan is to separate the gold car from the train, remove it from the rails, and rejoin the cannon car to the train, all without the knowledge of the box car of soldiers and 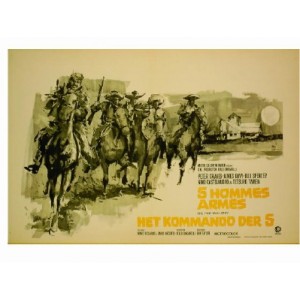 the troops along the route. They have to sneak aboard the train at the beginning, hiding, and kill the flat car soldiers without guns, while Mesito is building a side rail, joining it to the main after the first train passes.

Timing is critical in every phase of the operation.

You can see why this is a “western Mission Impossible.”

It s a fun little adventure with the music score by the great Ennio Morricone and below is a clip of the theme with a montage of movie posters and sound track covers of his work.

and here’s the trailer: