The three Green Hornet issues based on the television series I’ve had for a long time. While I understand they seem to have some value because of martial art master Bruce Lee appearing on the cover as Kato, when you look around, prices seem to be all over the place. One spot has the three issues for $100 each. Another place has #1 for $350. I’ve seen $75 at other places and even $19.95. All have some wear and/or damage described. 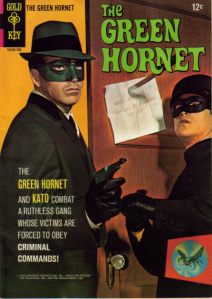 I don’t know. Mine are almost mint and not for sale.

The TV version had a few differences from the radio crimefighter. One confidante is District Attorney Frank Scanlon, instead of a police commissioner. The Hornet’s most ardent pursuer, Mike Axford is simply a police beat reporter here, not a former cop turned bodyguard/reporter. Secretary Lenore “Casey” Case knows his identity also.

The first book came out in late 1966 and concerned a gang that had a drug that enabled them to control anyone under it. Titled Ring of Terror, it wasn’t a very original story. Standard car chase, a couple of fights, a few developments in Britt Reid’s private lab.

The second book came out six months later and was a much better story. The writer had a much better handle on the characters by now. Kato is walking his girl friend through Chinatown on the eve of the Chinese New Year when they see her uncle attacked. A gang called the Red Dragons operating on extortion and murder are working the merchants for money. A secret leader known only as Chill is behind it all.

The Counterplot Affair in issue #3 starts when Reid hears whispers of a problem at the Bahratta Embassy. The Green Hornet and Kato investigate to find a kidnapping attempt of young Prince Ali, a boy soon to be King of the oil rich Arabian nation. A neighboring nation wants him to control the billions of dollars in oil under the country.

A second shorter story has the crime fighting duo attending a charity masquerade ball as themselves to break up a robbery. One of four Green Hornet’s and two Katos, the second pair intend to blame the hold-up on the originals.

It had been a good many years since I read these originally. They didn’t hold up nearly as well as when that middle teenager had first read them. The artwork and colors were bland, the panel layouts pedestrian. I remember the same thing in the Gold Key Star Trek and Man From U.N.C.L.E. comics that were published back then. No writer or artist are named in any of the books.

A big Green Hornet fan, I had two novels(disappeared over the years) and still own a VHS tape of one of the Forties serials. I’ve been waiting years for the long promised film. It’s listed as 2010 as of now. We’ll see. 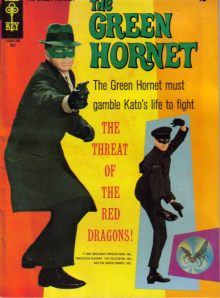