Judging by the following new trailer, the Stargate franchise may have been revived. I know, I know, trailers sometimes have all the good bits. That’s why the title of this post.

I thought the last few years of SG1 were unwatchable and I never warmed to Atlantis. I love me good science fiction and I know SF writer John Scalzi is a creative consultant for the new show.

We’ll see when it debuts in the fall.

WE: 112: The Hangmen of Sleepy Valley – Davis Dresser

AD: 116: Hunt Through The Cradle of Fear – Gabriel Hunt and Charles Ardai

The Private Life of Sherlock Holmes(1970)

Jack Finney is most known for his novel The Body Snatchers which has been filmed four times, the last two pretty bad versions. It’s a good tale, but I’ve always liked this one nearly as well. 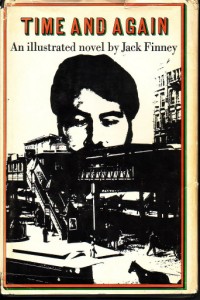 It’s a leisurely story of an artist, Simon Morley, that takes part in a government project on time travel. The idea is that, with self hypnosis, one can convince oneself that he is in the past and actually carry himself there. Morley is immersed in things antique, aiming for a period in New York City, 1882.

There’s a mystery his girl friend, Kate, wants investigated. A fragment of a letter with that date, partially burned, mentions the destruction of the world by fire. The project sets up in an apartment in The Dakota(here Finney “adjusts” history a bit as it wasn’t built until 1884).The apartment is decorated for the period and Morley dresses in clothes of the era, his pockets filled with all things old, like money, a watch, and wakes up, after the hypnosis, in 1882.

A second trip, he takes Kate, and they watch the letter being mailed, following the man back to a boarding house. On a third trip, Simon takes a room at the house and begins investigating exactly what’s going on. Blackmail is involved.

The book is lavishly illustrated with actual photographs and drawings from that era, Finney tying them into the narrative. One photo really struck me: A photo of the Statue Of Liberty’s arm and torch sitting on the streets of New York. 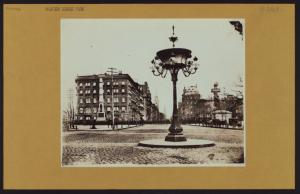 Richard Matheson had a similarly themed novel, Somewhere In Time(Bid Time Return), that was made into a film starring Christopher Reeve and Jane Seymour.

This book will be worth the effort to read. As I said, it’s not a slam bang, action filled novel. But Finney skillfully uses those drawings as Simon’s own(he is an artist) and the photographs are integral to the story as well.

There was a sequel published after his death, From Time To Time, though I didn’t like it nearly as well. It was open ended for a third book, but if Finney ever wrote it, it hasn’t seen the light.

I mentioned a while back that I’d intended a post on these boys. It had kind of slipped to the back burner though. 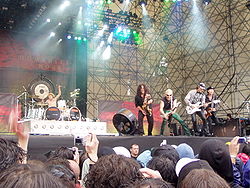 I’ve seen them live twice, once with Ted Nugent and the second with UFO opening for them. UFO, of course, featured Michael Schenker, brother of The Scorpions’ Rudolph Schenker, on lead guitar. If I remember correctly, Michael spent some time with The Scorpions as well.

I have a young friend in the business(he runs the sound board at most concerts in the area) and he called one day asking if he could bring a friend of his by so that I could set him straight. The Scorpions had just begun to have some commercial success with their Lovedrive album and his friend insisted that was their first record.

This was the days when vinyl was still predominant and I proceeded to show him the five or six earlier records I had(I didn’t have all of their previous releases myself). Ah, the young. They figure everything begins with them. I’m quite sure I was just as bad myself.

Here’s a couple of my favorites:

A tour driver is carrying a bus load of senior citizens down the highway when he feels a tap on his shoulder. A little old lady offers him a handful of peanuts which he gratefully munches down.

Shortly there’s another tap and it’s the little old lady with another handful of peanuts. He thanks her and eats them. This goes on several more times and the driver finally asks, “Why don’t you eat the peanuts yourself?”

“We can’t chew them because we have no teeth,” she replied.

The puzzled driver then asks, “Why do you buy them then?”

“Because we like the chocolate around them!” She answers.

The Cavalry Man series is a combination crime/western, the type of stuff Mr. Gorman does so well. I was quite pleased with these three novels.

Noah Ford is an investigator for the Federal government specializing in weapons and explosives. Though southern, he fought for the North during the war. He’s been on the outs with his family ever since.

It’s 1881 and Ford is out to find and arrest his brother, an arms dealer and former spy for the South, who he hasn’t seen for years. The man who’d made an improvement on the Gatling gun has been murdered and his invention taken.

Ford knows his brother has it now and plans to sell it to the highest bidder. As he’s moving in on the barn where his brother is hiding, the gun opens up, killing the two deputies with him, and wounding him.

When he regains consciousness, Ford learns that his brother was found in the barn, his throat cut. So who shot the weapon at them? Where’s the gun? Four suspects, arms dealers in town to bid on the gun. Which one?

Then someone starts killing off the arms dealers.

There’s a “Robin Hood” like bandit, who also happens to be the local ladies’ man, robbing a series of banks owned by one man. A disgraced friend is assigned to investigate. The man maintains his innocence and the two agents he blames are on the case as well.

Ford stops by to keep an eye on things. He doesn’t trust the pair of rogue agents either.
Then his friend is murdered. Believing the pair of agents are responsible, Ford stays around to prove it. When the pair grab the “Robin Hood” bandit and carry him in for the glory, all three are shot in the back.

Who’s the killer? The banker? Or more likely someone he hires? Things get even more complicated when the banker commits “suicide.”

Here, in 1885, Ford is looking for a missing investigator, as well as a scientist who was developing a hand held explosive device.

He wakes up from a nap with a straight razor at his throat, held by a beautiful woman who wants to know the location of the missing agent. Easily disarming her, her tune changes and she wants him to let “Uncle Bob” in from the fire escape. It is cold outside.

Seeing a skinny old man waving from out there, Ford goes to let him in when three shots from outside ring out, propelling the old man’s body through the glass. With Bob dead, the young woman suddenly won’t talk.

The local sheriff, hoping to shake her up, puts her in jail for not cooperating She still refuses to talk. When, while the deputy on duty steps out for food one night, leaving the door unlocked, someone sneaks in and strangles the young woman.

What have these two murders to do with his missing agent exactly? When the body of the scientist turns up drowned, Ford has another mystery on his hands. Is the missing agent doing all this? If so, where is he? 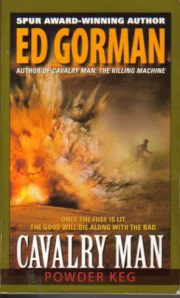 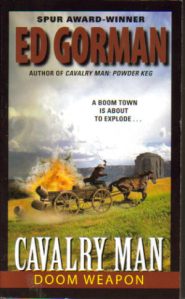 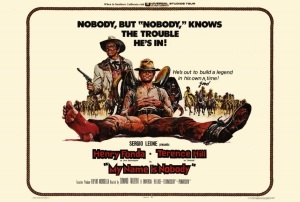 I think the last time I saw this movie was when it was in the theaters back in 1973. Thirty-six years. Didn’t realize it was that long until I started adding things up.

It’s always been one of my favorites. The Trinity movies were okay. This one was much better. Starring Henry Fonda as Jack Beauregard, the aging gunfighter that wants to get away from it 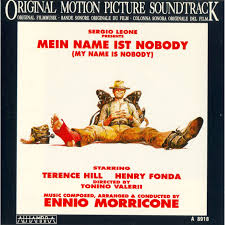 all, and Terence Hill as the hero-worshiping young gunman who’s biggest dream is to see Beauregard face off against the Wild Bunch. All one hundred and fifty of them.

In watching this film after so long, I noticed a few things I didn’t remember from that long ago viewing. Just before the writing credit were the words “From An Idea by Sergio Leone.” I guess I misremembered that one. 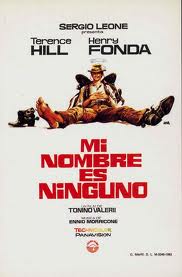 A second thing was, early in the movie, in a scene set in a graveyard, “Nobody” reads a name off a marker: Sam Peckinpah. Who, of course directed the movie The Wild Bunch. Nice little acknowledgment there.

The third was a small continuity error. When Nobody has manuevered things to set up the climactic battle, Beauregard takes out and dons his glasses to see who keeps backing the train up. Thirty seconds later, after he surrenders to the inevitable, he takes the glasses out and dons them in order to see his targets.

The music was done by Ennio Morricone, his usual superb job, original as well as other adapted to his style.

I enjoyed getting reacquainted with an old favorite.

This book was a recommendation of Paul Bishop(Bish’s Beat) on June 19th. As I was already a Frank Gruber fan from his Johnny Fletcher novels, I decided to give it a whirl.

It’s a fascinating chronicle of one man’s journey toward his goal of being a writer. The many stories he wrote that went nowhere, didn’t sell, he didn’t give up. He wanted to break into the pulp magazine market with dozens of magazines during that time.

He finally starts to sell and gets quite big. Then he moves into the book market with several false starts before beginning to do well. Same thing with Hollywood.

It’s a portrait of a man who’s dream never faded. He wouldn’t let it.

The book is filled with wonderful anecdotes of the writers he knew during those years. Raymond Chandler, Erle Stanley Gardner, Lester Dent, Walter Gibson, and a host of others that I’m not familiar with(I’m by no means as up on the pulp era as I’d like). And the editors: John Nanovic, Leo Margulies.

The style is nice and breezy, simple, I devoured it in one sitting. 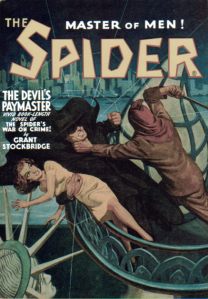 The villain in this one had stolen a device designed for “radium” treatments of the ill and turned it into a weapon, a ray that would heat metals, specifically gold and silver, causing horrific burns and death.

The Spider races around trying to save lives as he unravels the plot, constantly being thwarted by a blond-haired young beauty that had caught Jackson’s eye(you know us men).

The final climactic battle takes place inside the Statue of Liberty as the ray has been planted in the torch to bathe New York City.

This reproduction had everything the original magazine carried, down to the ads, a personals section, and a letters column. A typewriter could be had for sixty cents a week, you could be a radio technician and earn $30, $40, or even $50 a week. There was a Charles Atlas ad as well. In the personals, women could be a local demonstrator for Fashion Frocks, earning up to $23 weekly, own dresses free.

You could enlist in the Spider League for Crime Prevention for $.25 and receive a genuine Spider ring.

And the ads for sister magazines had such wonderful pulpy titles as The Corpse Sings A Torch Song(a Fire Marshall novel), Fangs of The Winged Cobra(A G-8 tale), The Tunnel Death Built(from Ace G-Man Stories), and Those Who Die Laughing(Strange Detective Stories). Not to mention the next issue Spider novel, The Benevolent Order Of Death!

There is even a short story, The Man Who Dialed Death, a tale of a pyromaniac.

Great fun all around. Norvell Page could write.