My selection for Forgotten Books this week is THE MOONSHINE WAR by Elmore Leonard. This is a new read for me, though I saw the movie based on it many years ago. Only one time and I remember quite a bit. Leonard wrote the script and it keeps pretty much to the book. The cast was a bunch of familiar faces and names.

Some of the actors with bit parts were Teri Garr(very young), John Schuck, Bo Hopkins, and Harry Carey, Jr. 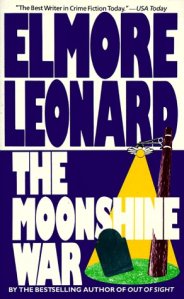 It’s 1931 and John W. “Son” Martin(Alan Alda) is a moonshiner. His father was before him. One day an old buddy of his from his army days shows up, Frank Long(Patrick McGoohan). Son knows exactly why he’s here. He’s a federal agent now, a revenuer, and Son remembers talking in some of their drunken bouts about his father’s stash: a hundred and fifty thirty gallon barrels of Kentucky moonshine that had been aging for years and worth $125,000.

Long doesn’t want it in his capacity as a Federal agent. He just wants the profit. He calls in Dr. Emmett Taulbee(Richard Widmark), ex-dentist, ex-con, now a bootlegger, to help him get it. Taulbee brings a small army of gunmen, led by a homicidal young man(Lee Hazelwood) to help.

Son refuses to tell where it’s hid; only he and Aaron, an old black man, knows. And neither of them is talking.

So begins the war. They don’t touch Son, but raid all his friends and neighbors under the guise of Federal authority, breaking up stills, confiscating the moonshine they find, all to put pressure on Son. A group of the neighbors even come to Son and ask him to hand over the liquor. He refuses. His dream is to sell it and get out of the business, buying a farm and marrying.

One of my favorite lines from the movie wasn’t in the book. The old sheriff of the county, Mr. Baylor(Will Geer) didn’t mind moonshiners. As Federal agent Frank Long walks up, Baylor is rocking on the porch, a pint jar of moonshine in his hand. “Are you confiscating that moonshine, Sheriff?” “You might say that,” laughs the old sheriff, “one sip at a time.”

Leonard’s brisk, no-nonsense style is here, the man can tell a story. Reasonable prices can be found on most sites for paperback editions(there are several), but I was amazed at first edition hardcovers. Prices ranged from $500 to $1500.