Face To Face is a 1967 film that starred Gian Maria Volonte, Tomas Milian, and William Berger. all veterans of the spaghetti western genre. It’s ranked among the best of those type of westerns.

Volonte plays Professor Brett Fletcher, a shy, unassuming Boston teacher who resigns his job and comes to Texas for his health. Though they never name an illness, they mention lungs one time and he coughs a lot. So it was likely tuberculosis. Tomas Milian is Solomon “Beauregard” Bennet, an outlaw gang leader, a killer. Berger plays a real life western character, Charlie Siringo, a Pinkerton agent who was one of the first to specialize in undercover work, infiltrating outlaw gangs.

There are a number of other veterans of the spaghetti genre filling minor roles sprinkled throughout the film. You know the type, recognize the faces but can’t 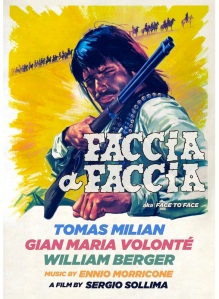 put a name to them.

Resting at a stage stop when a coach with a posse brings in Bennet, Fletcher takes pity on the outlaw when he begs for water. That’s all Bennet needs as he uses the clay jug to club a deputy, grab his gun, and escape, taking Fletcher hostage as he does, catching a bullet as they flee.

At a small hideout loaded with supplies and medicines, Fletcher removes the bullet and, as Bennet recovers, the two men start to like each other, having long discussions about right and wrong. Fletcher, the educated, honest man, has an effect on the career criminal. And vice versa. That is the heart of this movie, the changes in the two men as they move in opposite directions from what they’ve been all their lives.

Bennet is consumed with reuniting the survivors of his scattered band, Bennet,s Raiders, and wants the Professor to return to Boston. The life of an outlaw is not for such a man. It doesn’t work that way though. And Siringo is biding his time waiting for the gang to reassemble so that he can get them all.

Fletcher uses his intellect to meticulously plan a bank robbery that goes bad when Siringo gets word to the law and Bennet is captured. Fletcher takes command of the gang and becomes more greedy than Bennet had ever been. He’d finally found that ambition he was always lacking in Boston.

Throw in a vigilante band, a group of innocents escaping across the desert, the

two men confronting those vigilantes, and Siringo stepping in at the end, the final act reveals a lot about the character of the three men.

The movie was directed by the third Sergio of spaghetti western fame, Sergio Sollima(whose two other westerns, The Big Gundown and Run, Man, Run are also favorites), and the music is by the incomparable Ennio Morricone.

I enjoyed this one and would recommend it to fans of this type of film. 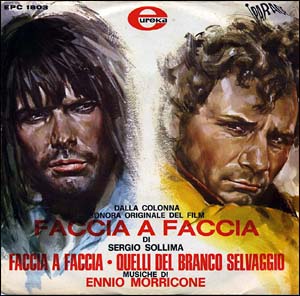