My selection this week on Patti Abbott’s Forgotten Books is a pair of westerns featuring a character known only as Clayburn. Al Conroy is one of a number of pseudonyms used by Marvin Albert. He wrote mystery, crime, adventure, and westerns among others. 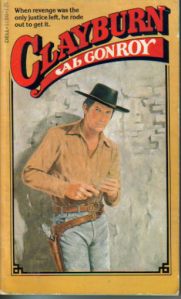 Clayburn has done many things to make a living: scouting for the army, gambling, and working for Colonel Remsberg’s Detective Agency among others. He favors black in his dress, usually in town when gambling and such, but wears buckskins and Levi’s when out on the trail.

He’s good with his guns, fast, though he’s not as fast as some of the most seasoned gunmen. He’s just a lot smarter. He can also fight with his fists, dirty, if he has the need.

Clayburn is gambling when he gets word that his best friend, Mike Owens, while moving a herd of ponies with his hands, is attacked and all but one is wiped put, Owens killed with by a large knife wound to the chest.

The lone survivor identifies the attackers as outlaw Ross Slater and his band. Clayburn knows instantly that Slater is the one who actually murdered his friend as, while scouting for the army, he’d nearly gotten into a knife fight with a sergeant, Ross Slater of course, before an officer had separated them. Slater later deserted and turned to the life of an outlaw.

Clayburn leaves immediately to hunt him down. You see, he knows something no one else does. Slater has a brother living as a rancher under a new name: John Thompson. That’s his “in” to getting his revenge.

He heads to Flathead, a town near Thompson’s ranch and hangs around playing poker, waiting. He gets caught up in a mess when he witnesses a woman being harassed by three men, stepping in when no one else does. They turn out to be Thompson’s men and the woman is a young widow many suspect of killing her much older husband for his ranch, which Thompson wants to buy at a reduced rate to accommodate his over extended herds on his own land.

Clayburn, after touring the young widow’s ranch, immediately spots a way to accomplish his aims and help the widow as well. He’s a methodical man that plans his every move, learned from his days as a detective. Never one to take chances, he tries to figure every contingency.

Clayburn has loaned a sum of money to an old comrade, Greco, from his detective days who wanted to invest in a stage line in a growing town. He goes along in the new coach purchased to look after his money.

On the way in, the pair are attacked, the new coach shot up, Greco wounded.

He learns the story when they reach town. Velma Lang is the partner and she’s being squeezed by a man named Cole Wheelock and his men, a dozen or so. They had been hired to clean up the town and now were extracting “protection” from local businesses. Mrs. Lang had refused. She also tells him their attacker would have to be a man named Alex Flood, who specialized in ambush with a rifle.

Clayburn sees that to insure the return of his money, plus interest, that he will need to take down Wheelock. After Greco recovers somewhat from the wound, they start planning their attack. Clayburn goes out scouting the lands around for anything he can use.

I liked these two books. There were two more Clayburn novels, but I don’t have those yet. Worth checking out.

THE MAN IN BLACK was later made into a film, Rough Night In Jericho, with George Peppard, John McIntire, and Jean Simmons as the good guys and Dean Martin as the villain.

I don’t know why, since it was based on an existing novel, but the script was novelized by Ben Haas under his Richard Meade pseudonym.

Lee Van Cleef and Lo Lieh star the this 1974 mix-up of martial arts and spaghetti western, with a dash of comedy even thrown in. Van Cleef is Dakota, a thief, and Lieh is Ho Chiang, a young karate master. 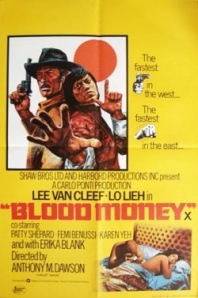 Dakota pulls an after hours bank heist, breaking into a series of safes, only to find a single picture of different naked women in each. When he puts dynamite on the fifth safe, the bank owner, an old Chinese named Wang, rushes in to stop it and is killed in the explosion. All he finds in that one is a stale fortune cookie.

The sheriff and his deputies appear to arrest him and he’s put on trial for murder.

Meanwhile in China, the Emperor is highly displeased to learn of Wang’s death. He’d sent the old man to America with a fortune to invest. Wang’s dead and the fortune is missing. Ho Chiang is brought in and threatened with death, along with his family, bringing on a martial arts fight straight out of that genre, complete with all the sound effects.

After the battle ends, the Emperor gives him one year to find and return his money or the family will be killed.

When Chiang arrives in town, several months have passed. Dakota has used all his wiles to drag the trial out, but he’s now been convicted and scheduled to hang the next day.

Needing to talk to Dakota, Chiang hatches a plan to get thrown in jail. He spots a sign above a saloon that says “No Negroes, no Chinese, or unaccompanied dogs allowed.” He walks in leading a dog on a leash, a fight starts, the sheriff arrives, only to be punched. Instant arrest.

Dakota reveals that the old Chinese’s death was an accident. He’d tried to stop him before he rushed up just as the safe door exploded open. The uncle’s lawyer bails him out, giving him the old man’s legacy: a thousand in an account, the four pictures, and the fortune cookie.

What he does is break Dakota out and take him on as a partner. He needs a guide as there is an address on the back of each photo. The fortune in the cookie says “At the bottom of every woman is a treasure. “Four women: An American, a Russian, an Italian, and a Chinese.

As the two men find each of the women, they have to contrive to look at each woman’s butt because there is a piece of a puzzle tattooed on each. A former gunfighter turned slightly insane preacher, a gambling hall owner, a British aristocrat touring the west, and the young Chinese returned to her family are the men they have to convince.

The insane preacher is pursuing them, having figured it out, a Mexican bandit and his men get involved, and Chiang falls for the young Chinese woman.

This movie was entertaining, I laughed out loud several times, enjoying the whole thing pretty much. One thing I didn’t expect, though I should have, is that Van Cleef is not the main player here. It was 1974, near the end of the spaghetti reign, and he was getting a bit of age on him after about ten years of many films.

The film was a co-production of Carlo Ponti and the Shaw Brothers out of Hong Kong and was directed by Antonio Margeriti.

Here is the trailer as it appeared under another title, The Stranger and The Gunfighter, in the U.S.: