I wasn’t sure what I was going to find when I started UNDER THE DOME. With the exception of his JUST AFTER SUNSET collection, I’d been less than thrilled with Stephen King’s recent books(one caveat: I haven’t read DUMA KEY yet). I’ve been a King fan ever since I first read ‘SALEM’S LOT. However, since his near death experience with the van driver, his writing had seemed to change. For me at any rate. 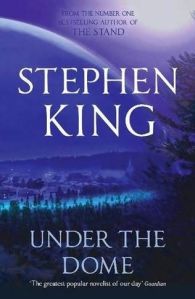 I’m happy to report the new novel finds Mr King back on his “A” game in a 1074 page monster. IT was one of the first really long books I read(I think James Clavell’s SHOGUN may have been the first) and discovered that when the book is very good, the longer the better. You find yourself sinking into a world that you don’t want to come out of and the longer you hang around, the more fun.

The dome came down over Chester’s Mill, a small town near Castle Rock, without warning. A small plane landing smashes into it, vehicles in both directions on the highways wrecks up against it. One woman innocently reaching for a flower has her hand sheared off at the wrist.

No one can get in, no one can get out. A cruise missile just leaves a smudge on the force field, along with fires on the ground. Tests show that the dome reaches more than eight miles up and, as far as they’ve gone down into the earth, a mile, it’s there. It allows only a small amount of moving air through, a small amount of water(a mist) through. Power is cut off. Cell service works. So does the internet. Land lines don’t work.

No one knows where it can from or who is responsible. Several theories spring up, with proponents of all insisting there’s was the right answer. North Korea. Aliens. Rogue scientists. Who would have such technology for something of this nature?

There is a large cast of characters. Dale Barbara is a cook at the local restaurant. But he’s more, a former army man that specialized in finding lost things in Afghanistan, a task for which he’s well suited. He’s been reinstated in the army by the President, promoted, and authorized to take charge of the situation inside the Dome to find it’s source and take it out.

Second selectman James Rennie doesn’t see it that way. He’s a used car salesman with a Hitler complex and the power behind the throne so to speak. He’s made a fortune from a methamphetamine lab he’d set up nearby, but now has a chance to be the big fish in the small pond. He’s also crazy and believes that God has ordained him to save these people, whether they want to be or not.

They are the main players in the struggle.

The tale follows the efforts of these two men, backed by the rest of the cast as they deal with each other’s moves and counter moves.

King deftly weaves a story that moves briskly along despite it’s length. Worth checking out and, as said, it might not take one nearly as long to read as you think.