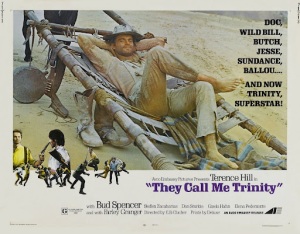 From 1970, THEY CALL ME TRINITY(TRINITY IS MY NAME) did several things. It revitalized spaghetti western films, creating a new sub-genre, the comedy western, while making a star of Terence Hill, blond, blue-eyed Italian, and really sparked my interest in the group of movies. Oh, I’d seen the Eastwood/Leone Dollar trilogy, but my interest hadn’t hit yet. This one did it.

Trinity(Hill) and Bambino(Spencer) are brothers, lazy, dirty, petty thieves. Trinity smiles all the time, Bambino wears perpetual gloom like another piece of clothes. Trinity has

a gun on his right hip, Bambino on his left. We learn early on, when Trinity accosts a couple of bounty hunters with a wounded Mexican, that he has a nickname when introduced. “The right hand of the devil!” spoken in awed tones. Naturally later, when Bambino draws and kills three men, he’s “the left hand of the devil!”

The story here is not new: the greedy rancher, Major Harriman(Farley Granger), wants to drive the community of farmers building in a valley out so that his own horse herd has more grazing land, Never mind that there’s plenty for all, he wants them out and he doesn’t care how it’s done.

Bambino is hiding out in town as the Sheriff while waiting for his men to find him. He came by that job as he was fleeing his escape from Yuma prison and shot a man he thought was after him. Turns out he was just the new Sheriff, to replace the former killed in the line of duty, headed in the same direction. So he takes the badge and poses as Sheriff in order to hide out.

He reluctantly offers Trinity the job of deputy, just wanting things to remain quiet. Their relationship as brothers is one of amusement on Trinity’s part, tolerance on Bambino’s. Refusing at first, Trinity’s eye is caught by a pair of attractive blonds in need of aid,

The farmers are Mormons and Harriman is not their only trouble. A Mexican bandit, Mezcal, and his outlaws drop in frequently, amused at the non-violence of the Mormons, taking

great delight in smacking them around. Nothing more violent. For now anyway.

Throw in a plot where Bambino plans to steal the Major’s horse herd when his men show up and it makes for some interesting hi-jinks. Weasel and Timmy show up and Trinity has to convince his brother to help the farmers. Of course that involves getting them to realzie that self-defense wouldn’t be against the Lord’s teachings. No killing though.

Funny sequences with the four of them teaching the men to fight with hands, feet, a piece of lumber, table, whatever’s handy fuel the humor.

One of my favorite spaghetti westerns. It sparked a sequel and a host of lame imitations infringing on the Trinity name.

4 thoughts on “They Call Me Trinity(Lo Chiamavano Trinita’)1970”