My selection for Forgotten Books this week is one of Ed McBain’s standalone novels. Hardly forgotten, the late author is perhaps more known for his 87th Precinct novels and the Matthew Hope series. DOWNTOWN appeared in 1989, the paperback shown here in 1993. 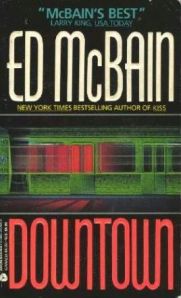 It is Christmas Eve and Florida orange grower Michael Barnes had finished his business in New York City. He has a couple of hours to kill before he catches his Boston flight to join his Mother for the holidays, so he decides to hit a bar downtown for a few drinks.

It doesn’t take long before he’s scammed by a hot blond and her fake cop partner. Supposedly stealing a ring off her finger, he’s frisked by the “cop” and the ring turns up. His wallet is checked then returned to his pocket. The woman doesn’t want to make trouble for him, just wants her ring back. The “cop” lets him go with a warning. When he gets back into the bar, he discovers all his cash and credit cards gone from his wallet when he tries to pay his tab.

A good Samaritan, a film producer, pays his tab and offers to go with him to the nearest police station to report the theft. Barnes asks him to drive his rental car as he’s not that familiar with this part of the city. When he gets out to check a tire his driver thought flat, his “good Samaritan” steals the car.

Shortly, he’s mugged, an undercover, as a hooker, female cop mistakes him for the mugger. He flees, following the mugger into a gambling den in the back of a fortune cookie factory, where he parlays his ten dollars, left over from his Samaritan gift, into six hundred dollars, then losing that, then having to flee when he sees his face on TV. A murdered man, the film producer, has been found in his rental car and a wallet with his “credit cards and cash” lay beside the body.

A beautiful Chinese woman, a limousine driver, picks him up and takes him on a wild ride as they work together trying to figure who’s framed him for murder and why. Obviously the con artists and the good Samaritan are connected as his cards ended up in the car.

It’s not long before the police, the mob, and a sniper are all after him.

A lot of action here, and humor as well, as the middle-aged Barnes tries to save his skin while learning just what the hell is happening.

Look for other books on George Kelly\'s blog., who’s filling in for Patti Abbott who’s on hiatus for a few weeks.

Spirit was a jazz/hard rock/progressive rock band formed in 1967. I had never heard of them before I stumbled across the YouTube clip below. It is an instrumental from their debut album in 1968. Click on below and listen to the song before reading
below and see if you recognize the riffs.

It bears a sneaking resemblance to maybe the greatest rock song of all time, released on an album in 1971, three years after the Spirit version. Randy Californis of Spirit said the English band opened for them on their first American tour.