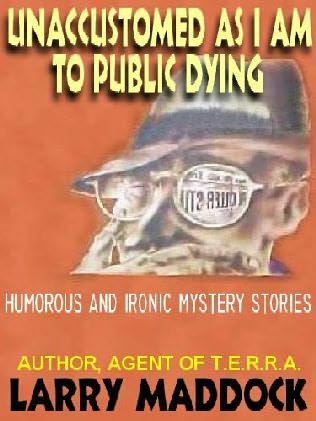 Forgotten book? I’m not sure this qualifies on that front. Certainly one i had never heard of before I stumbled across it quite by accident. I’ve never made a secret of my love of the late Jack Owen Jardine’s writings, posting on him HERE , HERE, and HERE. Having been a fan since my teenage years, finding UNACCUSTOMED AS I AM TO PUBLIC DYING was a happy accident. It is a collection of mystery stories originally appearing in Mike Shayne, Ellery Queen, Alfred Hitchcock Mystery Magazines. One story even appeared in The Man From U.N.C.L.E. magazine. All back in the sixties.

The blurb on the cover says “Humorous and Ironic mystery stories.” Yes, all there and most have a twist at the end. Published in 2006 as an ebook, I found my copy on Amazon for Kindle, but it is available in a number of ereader formats HERE.

I had a lot of fun reading this one, different from all the other books by Jardine(not a large body of work, more’s the pity) that I’ve read. Versatile writer, there are a couple of others I need to track down. That may be hard though.

The titles in the book are:

2: The Great Typewriter Robbery – the brains of the pair of crooks in this one is named Eddie O’Gorman.

6: A Matter of Timing

8: Unaccustomed As I Am To Public Dying

If one likes clever mysteries, this is one you should get. Of course you need an ereader though, which may stall a lot of folks. If I hadn’t had the Amazon Kindle application, I wouldn’t have it either.