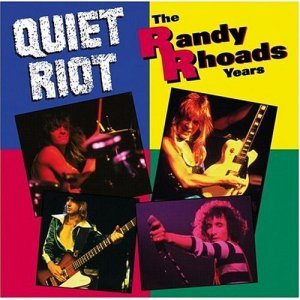 Guitarist Randy Rhoads rose to fame playing guitar for Ozzy Osbourne, joining the band in 1979 at the age of twenty-three. Crazy Train seems to be the song most people recognize. In 1983, Quiet Riot made a splash with their cover of Slade’s Cum On Feel The Noize. Somehow I missed over the years that Randy Rhoads was a founding member of Quiet Riot in the seventies, the band releasing two albums in Japan, but the record company never letting them out over here. The Quiet Riot that finally got an American recording contract and some success had only Kevin Dubrow left from those early days.

Rhino Records came out with this compilation in 1993 combining the best from those two albums, along with a live track highlighting a fierce guitar solo. A bit rough at times, it shows the early development of one of rock’s great guitar players, a man who influenced a lot of later players despite his death in March 1982 because of a plane crash.

Here’s a few clips that show the band back then:

and finally the live take: