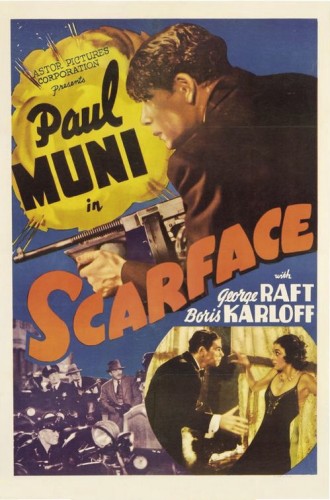 The Al Pacino/Brian De Palma/Oliver Stone remake has been a favorite of mine for a good many years. I think I may have seen it more than a few times, though not in some years now. But I’d never seen the original until this morning. Turner Classic ran it recently and it had been sitting in the queue since then.

In watching the the Paul Muni/Howard Hawkes/Ben Hecht 1932 picture, I had a feeling of deja vu. The basic plot was pretty much the same with just details differing. Booze instead of drugs, the cops in the showdown instead of a rival gang.

Paul Muni is the maniacal Capone clone, Tony Camonte, George Raft has a small role as Guino Rinaldo, erstwhile brother-in-law and the eventual downfall of Camonte. Boris Karloff has an even smaller part as a rival hood named Gaffney. The female leads weren’t familiar to me(my knowledge of the early film world is pretty much limited to the major stars). Ann Dvorak is Francesca Camonte, the sister that Tony seems weirdly “overprotective” toward(probably the times and attitudes toward women), and Karen Morley is Poppy, the lady friend of the man who brought Tony to Chicago, Johnny Lovo, and the one Tony wants.

The beginning of the film had a disclaimer that it was all based on true incidents. The only one that stood out was St. Valentine’s Day Massacre analogue.

Extremely violent for the times, at least to me, it has been called one of the best gangster films ever made. It was good. Some reviews placed it ahead of the remake, others not. I found them two really different films, despite similarities. The film-noir aspects of this one separates it from the remake. Both of them can stand side-by-side as tops in this genre.

Worth a look if one hasn’t seen it.