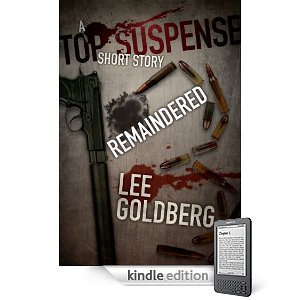 The first time I read Lee Goldberg’s short story REMAINDERED was a few years back, pre-Kindle time, when Amazon was selling short stories by various writers. You could print them out or, the best, they maintained an electronic file on the site where you could read your purchases whenever you felt the notion. The second time was when Lee released the story with two others, THREE WAYS TO DIE(worth picking up for the other two stories). But this third one is the best. You not only get the excellent short story, but a link to the short film based on it written and directed by Lee. I thought the film was an excellent twenty minutes. Ever since I knew he was doing this film, I’d wondered if it was going to be made available anytime soon for us folks that couldn’t attend the Owensboro festival where it was filmed and the showings since.

An eminently satisfactory method here. For a modest price, you not only get the excellent short story but also the fine short film, the subject of both well known to most writers. I mean the remaindered part, the book signings. Won’t say any more, wouldn’t want to spoil it. It can be ordered for Kindle here. it’s also available for NOOK readers. Pick it up You won’t be disappointed in either the story or the film.