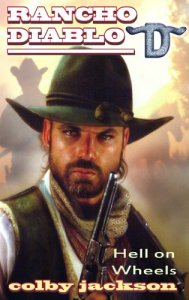 HELL ON WHEELS is the fourth entry in the RANCHO DIABLO series, this one by the able hand of Mel Odom.

Sam Blaylock and his family, along with the the hands that worked for them(more family than employees) were building the ranch into something to be proud of. The sulfur smell that gave it it’s name had been figured out and dealt with, the saw mill built and making a profit, and the beginnings of a cattle ranch in place. Not without effort and making a few enemies along the way.

One of the hands was young Mike Tucker, a fair cattle hand, but getting better. What he was good at were the guns on his hips.

Sam’s wife, Jenny, was always nervous around him. The cold eyes, the detached demeanor, the fear that he might influence her children. That fear was only exacerbated in town when three men from Tucker’s past threatened her oldest boy’s life before the Tucker killed them. To be sure, the boy had rushed into the store with his rifle, with her right behind him. Still, if Tucker wasn’t around, these things wouldn’t happen.

She wanted him gone. Sam and she had argued about it.

Then, when Sam and the boys were away buying a bull, Jenny is forced into a partnership with the young gunman on a mission of rescue. There, she learns some things about Tucker, things even her husband didn’t know, and Tucker didn’t want him to know. She learns some thing about herself as well.

A fine new addition to the series. I like the brevity of the book, and the breezy style. I read this one this morning while eating breakfast and drinking coffee. Oh, and I mustn’t forget to mention Keith Birdsong’s excellent cover art.

I’m ready for the next one.