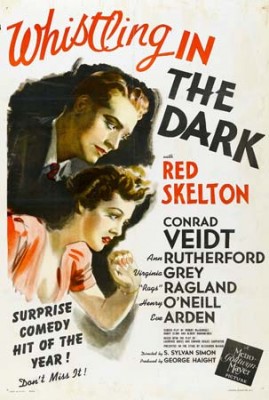 WHISTLING IN THE DARK was supposed to be red Skelton’s star vehicle and I suppose it worked after a fashion. He is a beloved figure(by me anyway) and I sat down to watch this one with great anticipation. It was based on a play and a previous 1931 film. I was expecting a bit better, but I’ve seen worse. Dark was the first of three films with the character in the Whistling series(in Dixie and in New York the other two).

Wally Benton(Skelton) is the star of a radio crime program, The Crime Fox, on the air for two years. Negotiations are on for a new contract with the sponsor(he wants a quiz show). Benton’s manager(played by Eve Arden)wants him to go out with the sponsor’s daughter(he already has a time or two) in an effort to help their case. He’s not happy because he’s planning to get married that night and his fiance(Ann Rutherford) is already unhappy that he’s gone out with the other woman(Virginia Grey).

There’s a phony religious cult, Silver Haven, that specializes in bilking rich old ladies out of their fortunes. They throw the word radiant out a lot in their ceremonies(radiant light, radiant happiness, etc.) They have a problem though. They learn from their lawyer that one of their victims, just deceased, had a codicl added to her will. They got the money after her only relative, a nephew, died. Until then, he got the interest on the estate.

A murder would just get the police looking into things and, admittedly, the cult couldn’t take too much looking over.

They hear the early show of the Crime Fox(two live shows three hours apart, one for each coast) as Benton’s credits are listed. Writer, actor, producer, and concoct the idea to get him to contrive the perfect murder plot, so perfect no one will realize it is murder. Hastily attending the second performance, they pose as prospective sponsors who want to discuss contract. That gets him away from the studio.

He asks them to send two messages, when they are in to big a hurry to allow him to do it, one to his fiance to explain he’ll be late and one to the current boss’s daughter that he will be late(a night club set up by his manager). A bad mistake as the cult grabs the two women to force him to dream up their murder plot.

Benton spends the night devising his plot and asks them to get certain things(chemicals to mix up an undetectable poison and arrange a plane ticket beside the victim flying to the reading of the will). His plan, which he carries out, is to switch out the poison after they tested it on one of the less important members(dead in four seconds) for a harmless powder. Things go awry when the man to carry out the plot walks off and leaves his brief case with the poison(convenient for the plot) and the cult hires a chemist on the other end to recreate the poison.

Now Benton and the two women have to escape and save the innocent man. That doesn’t go well.

Next we’re introduced to the most marvelous radio in existence(LOL). Benton comes up with a new plan and uses the phone wires(the instrument has been ripped out) and a radio for their amusement to rig a phone, calling the operator and through an elaborate switching of the wires back and forth gets the operator to call the airport to get a message to the victim. The killer on the plane hears the announcement to get the victim up front for an important message and manages to find and cut the radio wires(another convenient plot twist).

Here’s where it gets good(sort of).

Now Benton gets the operator to call the studio, where they’re anxiously looking for him for the live broadcast, and hooks up a live, remote show where he starts spilling the beans, with the girls, over the airwaves. They even have the help of the guy left guarding them, an ex-boxer who must have received a few too many head blows as he buys their “fake broadcast for amusement” gag.

I’m no radio expert(beyond the on/off button), but I’m not certain commercial radios of that period had transmitting capabilities. I could be all wrong and, if so, anyone with that knowledge, please let me know.

Skelton’s rubber face is in full mode here and the big fight scene when the ex-boxer finally catches on is loaded with his patented pratfalls. Rapid fire one liners dot the script.

I had fun watching this, but it wasn’t a great film. A fan of Skelton, I liked the featuring of his comedy throughout. But, despite his appearance, I’d expected more crime/mystery. I’ve not seen the other two films in the series, but one description likened them to the slick production, but not much body, of the Thin Man films after the first two.

For more overlooked goodness, and other things, check out Todd Mason\'s SWEET FREEDOM.

2 thoughts on “Overlooked Movies: Whistling In The Dark(1941)”