Duke University defeated Michigan State tonight, 74-69, to break the NCAA men’s basketball record for Coach K, passing Bobby Knight with which he was tied going into the game. Michigan State didn’t make it easy for the Dukies, whittling away the twenty point lead Duke had put up, 61-41, with a 28-13 run down the stretch.

From this point on, each win sets the new record. I don’t know who, but someday someone will likely break Coach K’s record, whatever he ends up with.

For the moment though… 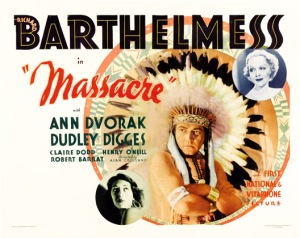 The film stars Richard Barthelmess, an actor big during the silent film era, but his star faded after sound hit the market. He did a few before leaving the business, enlisting in the Naval Reserve during WWII, then living off investments the rest of his life. He passed away in 1963, at sixty-eight, dying of cancer.

Barthelmess starred as Joe Thunderhorse, billed in the wild west show he stars in as Chief Thunderhorse. He does trick shooting and acrobatic horse riding, plays the “ignorant savage” to the crowds of white folks that want to see genuine wild Indians. But Joe left the reservation when he was a boy, brought East by a Indian commissioner sympathetic to the Sioux plight. Educated, from college, Joe has become completely inured to the white life, the night life, the life of a playboy. One bored young rich woman(Claire Dodd) has set her cap for him. He makes three hundred a week, soon to be four hundred. A fine life, he’s forgotten most things about his people and their way of life.

The show is playing the Chicago World’s Fair of 1933-34 when Joe receives word that his father, Black Pony, is dying and leaves to see him. That’s where he learns some appalling things. While old, he’s dying mostly from lack of medical care.

Graft is rampant on the reservation. The villains here are the agent, Elihu P. Quissenberry(Dudley Digges), the doctor, Turner(Arthur Hohl), and the undertaker, Thomas

Shanks(Sidney Toler). They’ve got a sweet racket going. Every time an Indian dies, his land is sold to a white man. The money is bled off for an expensive copper casket, fees, and a “phantom” caregiver inherits the rest, which includes his share of the Indian fund, money supposedly earned from grazing rights and other leases. Any family is left to find other shelter.

Joe starts making waves. He assaults the doctor that claimed he was giving regular care and is warned by a young Indian maid, and eventual love interest, Lydia(Ann Dvorak), that his name is still on the books and they could force him to stay on the reservation. It doesn’t stop him. He wants a traditional ceremony for his father, which enrages the preacher, another with his hand in the cookie jar, and Quissenberry.

Joe goes ballistic when he finds his fifteen year old sister, Jenny, which he hadn’t seen since she was two before he came home, raped. It was Shanks(Toler) and we get an interesting chase with both men in convertibles, Joe tying a rope off on his car, flipping a lasso over Toler and yanking him out of his car when he slams on the brakes. He then proceeds to drag him along the road for a while.

He goes on trial for the two assaults with the agent’s pet Indian judges and a hand-picked defense attorney who pleads him guilty without even speaking to Joe. Ninety days in jail, a one hundred dollar fine, one hundred for court costs, and one hundred lawyer fees, coincidentally just what he happens to have on him.

Lydia breaks him out and he’s off to Washington to get to his benefactor, Indian commissioner J. R. Dickinson(Henry O’Neill), who warns him there’s not much he can do. To many business interests and government officials arrayed against them both. They concoct a plan and Joe ends up testifying before Congress about conditions. There Joe speaks the best line in the movie, from which the title derives:

“You used to shoot the Indian down. Now you cheat him and starve him and kill him off by dirt and disease. It’s a massacre, any way you take it!”

He’s returned to the reservation for trial when Shanks dies and his only defense will be testimony from Jenny: justifiable homicide. Quissenberry won’t allow that and sends his 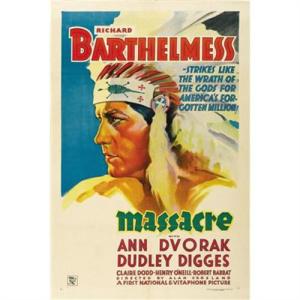 Police Chief of the tribal force to grab Jenny.

That sets up the men of the reservation to attack the town, an Indian attack in 1933, and free Joe, pursuit by heavily armed white cops, as they go to rescue Jenny.

I was surprised by this film, a surprisingly sympathetic view of the Sioux for the times. There may be others before and after, I don’t know, but I grew up where the native Americans were the villains and the good white guys the heroes. Probably just weren’t watching the right stuff when I was growing up.

One last thing. Joe had a black man as his assistant. At times, he seemed very intelligent, others the stereotypical black of films of the day. I kind of got the impression he was a very smart character that gave the whites he encountered what they wanted, expected.

For other overlooked movies, check out Todd Mason over at Sweet Freedom.