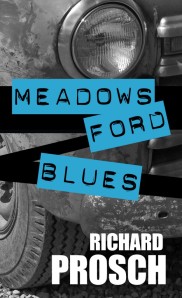 You know that old saying: write about what you know. Richard Prosch does that. In a manner of speaking. He’s a Nebraskan and the stories in MEADOWS FORD BLUES are set in the small Nebraska town of the title.

It’s one of those small towns where everyone knows everyone else and often knows too much of your business. I know because I grew up in a town very much along those lines.

The characters here are mostly ordinary folks, all sorts of jobs(well, excluding the hit man returning home for a job), everything from cop to waitress to farmer.

The time frame for these stories cover a lot of years and mostly in the cold, wet winters. As Bill Crider says in his brief introduction, bad things happen in Meadows Ford, in the past, the present, sometimes overlapping. You’re never quite sure what’s happening, a good thing, keeping one engaged in the smoothly written prose.

A couple of these stories I was familiar with, though Prosch makes note in the acknowledgments of some changes. It’s been awhile since reading them the first time so that was fine. While remebering them a bit, the endings still came as a surprise.

A fine collection. As has become my habit, I read them in the early morning hours over coffee, a nice combination, satisfying all my senses.

Another connection to my growing up years was one character prominent in a story, a 1968 Camaro. One of that same model played a prominent part in my life for a few years just after high school and brought a smile to my face when I got to it.

The stories in order:

Richard Prosch presides over his blog, MERIDIAN BRIDGE, a spot I drop into on a regular basis. Links to MEADOWS FORD BLUES and his previous ebook, a collection of western stories, DEVIL'S NEST are here.

Both are highly recommended.