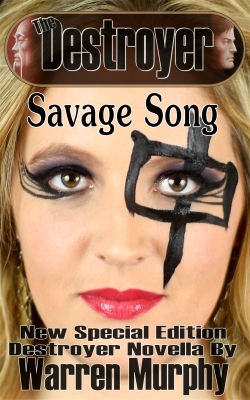 As long as Remo Williams had known Chiun, the Master of Sinanju, he had had his obsessions. Barbra Streisand, soap operas, the newswoman Cheeta Ching, Judge Jenny. He’d soon move on to the next one.

So when the two assassins are ordered to protect America’s latest singing sensation, the blond-haired Madame Googoo(yes, who you think it is), Remo was not surprised, well not to much, to learn she was his latest in a long line. There’s even a couple of other “older” popular singers raked delightfully over.

Everyone’s favorite heroes return in this new novella and, as usual, author Warren Murphy spares no one his wit, skewering everyone, whether it be politicians, entertainers, or writers, the only qualification for his rapier being “pompous,” stupid, or both.

It was a disappointment for me a few years back when the series ended, done in by a long run of uninspired novels, before Warren Murphy and James Mullaney took back the reins to save it. A bit to late though. Here’s hoping this new series of ebooks catches on and we get many years of more tales. They’ve been favorites of mine from the beginning.

It can be ordered HERE. If you’ve never tried a Destroyer tale before, here would be a good place to start. Murphy and his sons, through their Ballybunnion Books, have taken over the ebook publishing of the older novels, promising reformatting to relieve some problems, and I guarantee if you try this one, like the old Lays Potato commercial that says “Bet you can’t eat just one,” you try one Destroyer, you will want more.