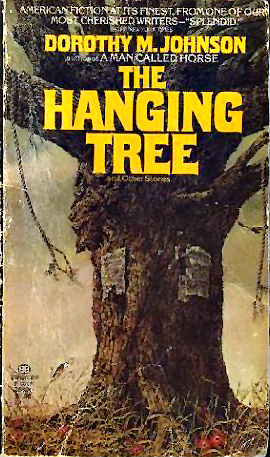 Dorothy M. Johnson(1905-1984) was known primarily for her western stories. She grew up in Montana and later taught creative writing at the University of Montana. Her writing career began in 1930 with an article sold to the Saturday Evening Post and her first fiction sale was in 1935. It was after WWII, which interrupted her writing as she worked for the Air Warden Service, that she really took off. Three of her stories were made into the notable films THE MAN WHO SHOT LIBERTY VALANCE, A MAN CALLED HORSE, and THE HANGING TREE. Her short story LOST SISTER won the Spur award for best short story and she was given the Levi Strauss Golden Saddleman Award for bringing dignity and honor to the legends and history of the West.

This collection came out in late 1958(my copy is the seventh printing from early 1977. The ten stories come from the early to mid-fifties except one from 1942.

The stories in order: a brief look at some favorites.

1: LOST SISTER(Spur Award winner): the family was all agog because a sister was returning home from a life with the Indians. The only sibling that was alive when she was taken lives a thousand miles away. The other three and a brother expect someone like them. But you see, she’d lived among the Indians for forty years.

3: I WOKE UP WICKED: a naive young puncher gets involved with a slightly crooked relative while waiting for the bank to open so the trail boss can pay off the men. He’s standing by the sheriff’s horse while his relative, a deputy, goes in to see if the bank is open for business. Shots ring out, the relative and a few others burst out of the bank and leap onto horses. The puncher jumps on the sheriff’s horse right behind. Suddenly he’s a bank robber and a horse thief.

4: THE MAN WHO KNEW THE BUCKSKIN KID:

5: THE GIFT BY THE WAGON

6: A TIME OF GREATNESS

7: JOURNAL OF ADVENTURE: a man goes west to learn, leaving behind a woman and promising to return. He keeps a journal of his adventures, the near death, living with Indians, getting sidetracked, and finally coming full circle.

8: THE STORY OF CHARLEY

10: THE HANGING TREE: I posted on the movie version here.

The Hanging Tree is the longest story comprising close to half the book. A fine set of stories by a writer I need to read more of if I can find them, find the time.

For more forgotten books, check out Patti Abbott over at PATTINASE.

CLOCKWORK ANGELS is the name of Rush’s forthcoming album, a concept it seems and SF novelist Kevin J. Anderson will be working with drummer, and lyricist, Neil Peart on a novel based on the album. Both album and novel are due late summer, early fall. To whet your appetite, here’s a video of the first single release HEADLONG FLIGHT: