97: WE: The Hanging Tree and Other Stories – Dorothy M. Johnson

101: TH: The Blood of Patriots – William W. Johnstone with J. A. Johnstone

When I started watching RIDERS TO THE STARS, I had thoughts that it might be another entry in the movies to be overlooked series and I was right. But, I actually liked this one. Make no mistake, it wasn’t a very good movie and didn’t rise to that level of badness that makes it good. But I liked it anyway. Go figure.

In this world, a ship is launched into space and crashes back to Earth. The parts found had been bombarded by cosmic rays and shattered very easily when banged against something. The scientist in charge knew that meteors floated in space for billions of years with no apparent effect. How? Some kind of shield over it. They needed to know.

A plan was born.

A dozen scientists, scientifically picked, were invited for a week at an air base. They weren’t told why and went through a battery of tests, psychological and physical until they were whittled down to four. Those four got the plans then and an offer to be part of it.

A meteor swarm was scheduled to pass Earth in a couple of weeks. Three ships were to be sent out in an effort to get meteor samples, a scoop in the nose of each. They were 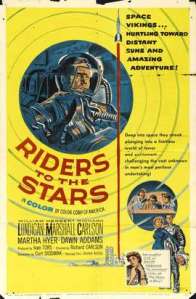 given a week to decide whether to participate. One angrily declined immediately, one signed up just as fast, and the other two wanted to think about it.

Walter J. Gordon(Robert Karnes) was the one who decide first. The next was Dr. Jerome “Jerry” Lockwood(Richard Carlson). The final member was the son of the project lead scientist, Dr. Richard Donald Stanton(William Lundigan).

Now the things wrong with this one.

The first I wouldn’t have known if I hadn’t read it. The business of cosmic rays destroying metal couldn’t happen and was already known at the time.

The things I noticed wrong:

When they got the exact time of the meteor swarm passing, the project leader said, “You’ll need to take off in fifty-three minutes at 5:00 am. They must have used a lot of

stock footage because every out door scene of them getting the rockets in place was in broad daylight. And most of them were shots of ships being lifted into place, cranes rolled in and hooked up, stuff that would take a lot more than fifty-three minutes, stuff that should have been done days earlier at the least.

The first ship to go down tried to corral a meteor too big and exploded. We see the fellow in space suit floating along, a grinning skull peering out of the face panel.

And the big one:

They wanted to find out why their ship was turned into mush so to speak. So what do they do, send three ships up to catch meteors and no such effect happened to them.

The script was by Curt Siodmak with an uncredited rewrite by Ivan Tors, likely the reason for so much scientific inaccuracies and was directed by Richard Carlson.

It was the second in Tors’ Office of Scientific Investigations trilogy, the first being THE MAGNETIC MONSTER and the third GOG, which I haven’t run across yet.

This was better, not by much, than THE MAGNETIC MONSTER.

For more overlooked movies, check out Todd Mason over at Sweet Freedom.