The script for JESSE JAMES was developed from a series of newspaper articles from the 1870s that portrayed the James Brothers as sort of Robin Hood types. Darryl F. Zanuck, executive producer, wanted this approach. Nunnally Johnson is credited with the script, although three other writers worked on it. Henry King directed with a one day assist by Irving Cummings(uncredited) when a brief illness slowed him.

Tyrone Powers and Henry Fonda played Jesse and Frank, respectively. Nancy Kelly plays Zerelda, “Zee,” Jesse’s lover and eventually his wife. Randolph Scott is Will Wright, a Marshall friendly to Jesse mainly because he loved Zee as well. John Carradine has the role of Bob Ford, the man who shot killed Jesse James after working out a deal for the reward money, $25,000 in the film and a pardon. Lon Chaney has a small role as one of the James Gang(in one chase scene, he fell off his horse and was trampled, though not hurt badly. He finished his scenes, but director King claimed he was drunk and fired him. He was eventually dropped by the studio.

One note before I get into the film. Two horses died when run off a cliff in one scene. They’d been blindfolded before being driven off the cliff. It led to the American Humane

Society getting involved in Hollywood film making and the familiar AHS certification that now appear on all films with animals used. The film was shot on location in Missouri, a small town named Pineville, still rustic enough to functon as a western town.

While there seemingly have been innumerable versions of the James story filmed, such that what is true or not can hardly be known. But this film is notorious for straying from the truth quite often. All the elements we are familiar with are here, though rearranged and twisted a bit.

The boys get into the outlaw business because of the railroads in the movie. An agent for the railroad, Barshee(Brian Donlevy), was using thuggery to get folks to sell their farms at giveaway prices, a dollar an acre, not above beating children to get reluctant farmers to sign away their rights. He tries that with the James family, just farmers here(no mention is made of their past with Quantrill during and after the Civil War), and runs into a buzz saw. A sucker punch on Frank fails and Jesse happens along to hold his thugs off with a gun while Frank administers a beating to Bartell. When Bartell tries to attack with a scythe, Jesse shoots him in the hand. Bartell immediately accuse Jesse of backshooting him in town and gets his thugs sworn in as lawmen to arrest him. 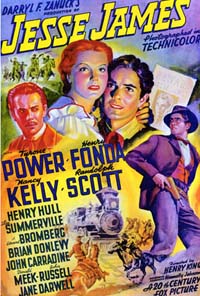 The brothers take to the hills until something can be worked out. When they arrive at the farm, a bomb kills their mother and they swear to get Bartell, Jesse shooting him to death in a saloon. Of course in real life, Mrs. James, though badly wounded and losing an arm, survived to bury her son. It was a younger brother that was killed in the bombing.

They go on a campaign to rob the train line that sent the thuggish Bartell.

Marshall Wright(Scott) works out a deal after a couple of years that will get Jesse a minimum sentence if he turns himself in. Five years max. A friendly judge is brought in and Wright is to serve as defense lawyer for Jesse. He marries Zee, who’s promised to wait for him while he’s in prison. It’s all a set-up, though, and as soon as he’s locked up, the judge is shoved out the door for one sympathetic to the railroad owner and a hanging is promised. Wright is outraged and the railroad owner tells him to go tend to his Marshalling business. Frank sends word that if Jesse isn’t released by midnight, he’ll come get him. The army declares martial law and surrounds the jail.

It doesn’t help. One continuity goof here: the escape is midnight, but when they race outsie, shooting into the ir to disperse the crowds, it’s broad daylight.

The years go by and the James family never stay anywhere long, Jesse suspicious of any incident off kilter. Zee grows weary of the constant moving, the robberies. Not what she’d signed up for. When their son, Jesse, Jr(only one child in the film, though they had two in real life), is born and he’s not able to get there because of pursuit by a posse, she breaks and has Wright, who’s there, take her back home. A negro servant named Pinkie(played surprisingly straight for the times, stays long enough to give Jesse a letter telling him not come after her.

The Northfield robbery that was the end of the gang is handled a bit differently. Bob Ford was already a member of the gang, had been from the beginning, and negotiating a deal with the governor(the reward plus a pardon for all activities). The law in Northfield is alerted to the coming robbery and prepares accordingly. In real life, that it went bad, was helped by some of the gang being drunk. The Younger brothers weren’t there, at least not mentioned. Frank is the only one who escapes unscathed, with Jesse getting a bad chest wound. Two were killed and the rest arrested, one being Bob Ford. He was riding a gray horse and everyone had instructions not to shoot him.

he conclusion goes about like all of them do with the exception here having Jesse retiring and the family, reunited and Jesse healed from the Northfield wounds, heading out to California. Bob and Charlie Ford arrive ostensibly to deliver a message from Frank about an easy bank waiting to be hit. When he steps up onto a chair to remove a sampler made by Zee for packing for the trip, Bob shoots him from behind.

Here’s a clip of the fight between Frank and Bartell:

For more overlooked movies and related stuff, as always, check out Todd Mason over at his blog, SWEET FREEDOM, on Tuesdays.