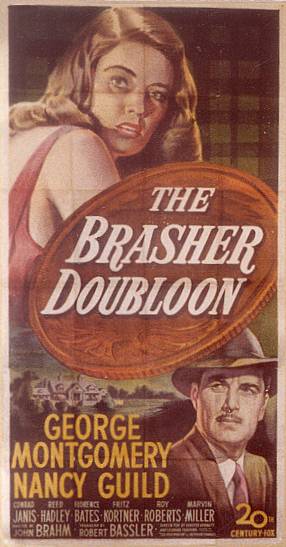 THE BRASHER DOUBLOON is a 1947 film based on the Philip Marlowe novel THE HIGH WINDOW. According to Wikipedia, it was technically a remake of the 1942 TIME TO KILL, an adaptation of the novel as a Mike Shayne film that starred Lloyd Nolan as Shayne. This one starred George Montgomery as Marlowe(though Fred MacMurray, Victor Mature, and Dana Andrews were all attached to the role at some point during pre-production) and Nancy Guild as Merle Davis, the timid, possibly mentally challenged secretary.

The plot follows the novel pretty closely with the exception of doing away with the counterfeit Doubloon subplot. It’s all about the blackmail over the death of Mrs. Murdock’s husband, in this case Murdock instead of her first husband in the novel. The role of Mrs. Elizabeth Murdock is played by Florence Bates. Her son, Leslie, is a very young Conrad Janis(all of nineteen at the film’s release).

Not a bad film, a tight little mystery, it only suffers when compared to other Marlowe films, notably Bogart’s turn in THE BIG SLEEP. I’ve watched most versions now, with the

exception, I believe, of Nolan’s Mike Shayne turn, and I would rank it as a decent effort.

I finally broke down and bought one of those pirated editions of the film, getting eight Marlowe films in one set. I have no idea why THE BRASHER DOUBLOON hasn’t been released in a nice DVD package. I think us Marlowe fans would appreciate such.

A word on the coin of the title that plays an integral part in both the novel and the film. A rare coin mentioned in the film as being worth ten thousand dollars, it weighs 26.6

Besides Chandler’s THE HIGH WINDOW, the coins is mentioned in THE BURGLAR WHO STUDIED SPINOZA by Lawrence Block and THE MANSION IN THE MIST by John Bellairs.

The film is also available on Youtube, broke down into six parts.

For more overlooked movies, as always, drop in on Tuesdays at Todd Mason over at Sweet Freedom.

Moonstone Books offers us SHADOW OF EVIL, the first new Spider novel in sixty-five years. It follows along a few months in time after the last Spider magazine story. Richard

Wentworth had retired the Spider, a spur of the moment decision when he killed a fake Spider in a climactic battle and decide to let it stand as the real thing.

For over ten years, he battled all sorts of criminals and monsters, dispensing justice as only the Spider could, denying himself a private life. He wonders if it all was worth it. Crime seemed as rampant as ever. Now he simply wanted to marry his love, Nita Van Sloan, and begin to start a family.

Someone is dragging old weapons of evil from New York’s past and killing people. The first day the Green Fire kills a trainload of people, the bodies robbed of every piece of jewelry and cash on them. The second day people begin falling after breathing colored smoke from performing planes, poisoned by a combination of altered products of all sorts put out for sale reacting with chemicals in the smoke.

Richard Wentworth is acting in his capacity as a criminologist with Police Commissioner Kirkpatrick, trying to make sense of it, refusing to bring the Spider back. A batch of pictures had been sent to a local newspaper showcasing the burned bodies of a group of orphans and their nun chaperoning them from the train. No other contact had been made. No demands. Nothing. The only thing they knew was that it had to be well financed.

It was the third day that changed his mind. A bomb below the Grand auditorium killed thousands and severely injured many more. Wentworth himself had many injuries. Kirkpatrick was in bad shape. And Nita, his Nita, clung to life, so badly injured they were afraid to operate until she stabilized.

It was time for the Spider to come out of “death!”

As our hero begins to dig in and ferret out some of the villains, questioning them in his own inimitable style, he learns the leader is known only as the “Boss” and no one knows his identity, his ultimate aims.

But the Spider will find out and stop him. He has to. Past the deaths of thousands of innocent people and the untold damage, there was Nita. That couldn’t be allowed to stand.

I quite enjoyed this one. I’m a sucker for that old pulp stuff.

In the back of the book, there’s a short story featuring Ed Race, a pulp character, the sharp shooting Masked Marksman, created by Emile C. Tepperman, that appeared in the pages of the Spider Magazine. Rich Harvey wrote this one.

I got my copy HERE