Timothy Zahn is a favorite author both for his original works and his Star Wars tie-ins. He, along with James Luceno, are the only authors that can draw me back into the Star Wars 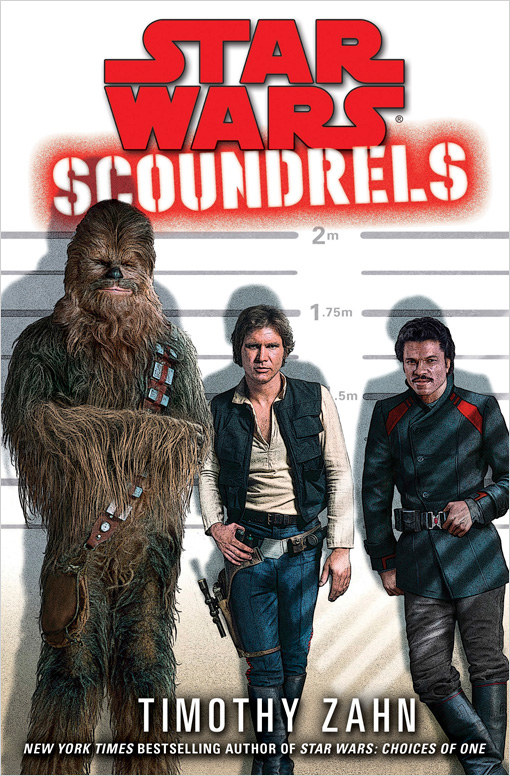 SCOUNDRELS is set shortly after the film Star Wars(I refuse to call it chapter four: A New Hope; it was Star Wars when I saw it in the theater and read the Alan Dean Foster novelization). Han Solo is still in need of credits, having lost the reward for aiding the rebellion, to pay off Jabba The Hut. He’s approached by a wounded man wanting his aid in recovering a fortune in credit tabs stolen from him by a member of the Black Sun criminal organization.

They’ll be tough to recover so he recruits a team of eleven, all with specialties needed to pull off the con. It’s been called an Ocean’s Eleven homage which is certainly true.

Since Luke and Leia are not present in this novel, and only briefly mentioned, I would place it as happening at the same time as Alan Dean Foster’s novel, SPLINTER OF THE MIND’S EYE, where only Luke, Leia, and Darth Vader appear. It was written before the first film was even released and illustrates, to me anyway, that Lucas’s admonitions to the contrary, Han Solo was originally a minor character that wasn’t meant to appear again. And Luke and Leia were not brother and sister, Darth was not their father. Han Solo getting so much attention upset the apple cart so to speak.

And finally, there’s a great reveal on the last page of SCOUNDRELS I didn’t see coming.

Highly recommended and can be ordered HERE.

Winner Lose All is a prequel novella to SCOUNDRELS involving Lando and a few of the participants of the novel. A Sabacc tournament, a fabulous prize to the winner(worth fifty million credits), murder and frame-ups, and our four heroes working to reverse things. A nice, tight little story.