THE FAST AND THE FURIOUS was the second film produced by twenty-eight year old Roger Corman. He had a huge budget compared to his first effort, a twelve thousand dollar film titled

MONSTER FROM THE OCEAN FLOOR. The fifty thousand(so said Turner Classic, but IMDb says sisty-six thousand) he had for Fast/Furious enabled him to get name actors for the first time. The deal he made with Ireland, at the actor’s insistence, was to allow him to direct the film with a pay cut on the acting job. He got Edwards Sampson(the way listed in the credits) to “aid” him in the direction. Corman write the story which was developed into the script by Jean Howell and Jerome Odiun. The film was shot in ten days and picked up by a new company, American Releasing Corporation, an early version of American International Pictures.

Ireland is Frank Webster, a man on the run. He’d broke jail where he was awaiting trial for murder The police were scouring the area for him. No picture, only a description. He’s an

innocent man, accused of running a ruck driver off the road and killing him. He was in fact trying to be run off the road by that man because he was a solo driver in competition with the company for which he drove. His life was threatened by the man’s buddies and Webster, though he knew he could probably prove he wasn’t a killer at trial, didn’t figure he would make it that far.

In a small diner where he’d taken refuge, he meets Connie Adair(Dorothy Malone), a young woman with a white Jaguar headed for a sports car race that crossed over into Mexico. She’d stopped for lunch and was busy fending off unwelcome advances from a truck driver(Bruno Vesoto), who grows suspicious of Webster as he offers him a ride, refused, talks

about the murdered Webster, not interested, bragging about how he would shoot Webster should he run into him, then pulls a gun to club Webster when he realizes who he must be while the waitress was in back. The driver falls and hits his head, Webster grabs the gun and the girl and beats it.

The waitress was a real airhead, a flighty talker who gives the couple unkowing helo when she describe the jaguar as a jalopy.

The plan was to drive back roads to get into Mexico, but the heat was up and when he encounters a group of the sports cars getting ready to be lead through the road blocks and joins them, ending up in the park where the race is to begin, where they learn the race committee had decided last night it was to dangerous to allow women drivers. Connie is furious despite her situation. So Webster becomes her driver, at his insistence.

Webster has to do a qualifying run, with Connie along(but she won’t be allowed in the race). He has the second fastest time. The next twenty-four hours is a comedy of avoidance as Connie keeps running into people she knows: a snobby guy, Faber(Bruce Carlisle), who thinks Webster is below her station and is suspicious; a girl friend(Sally Phillips) who

invites them to a party and to stay over for the night which they refuse, a groundskeeper at one spot they hide that tells them the police will be patrolling the area that night. You see, the truck driver in the diner had regained consciousness long enough to tell them about the white Jag.

Webster locks her in an old shack while he goes and enters the race. She sets the building on fire, gets help when a convenient young man drives by, and calls the police on him. By now, she’d heard his story, believed him, and a kind of Stockholm Syndrome had seized them both. 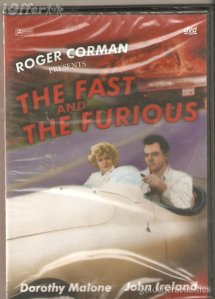 The race begins, the cops are waiting for him at the border, and Connie has borrowed the snobby Faber’s car(ignition problems had caused him to pull out, but they were fixed now). You know how these things have to end.

As with all cheap jack productions, this one had it’s problems. At the road block where the sports car drivers are being gathered, a boom mic and handler are visible in the windscreen for the scene. The shadow of a boom mic is seen when the couple climb out of a ditch where they’d hid from a passing police car. Smudges on Connie’s face from the fire she’d set in the shack change shape from scene to scene. During the early part of the race, the announcer is giving detailed action coverage long after the cars have gone.

It’s Tuesday and Overlooked films will be hosted by Todd Mason over at SWEET FREEDOM.