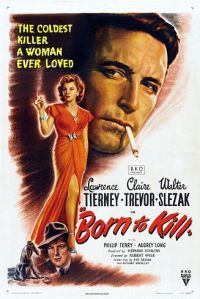 BORN TO KILL is a story of two people drawn together, one a cold-blooded killer, the other a cold-blooded woman. It’s based on the novel Deadlier Than The Male by James Gunn. The script was by Eve Greene and Richard Macaulay and was directed by Robert Wise, his first noir film effort.

Lawrence Tierney is the killer, Sam Wild, and Claire Trevor is the woman, Helen Brent.

Sam Wild is a man with impulse controls, the result of some accident in the past briefly mentioned. Elijah Cook, Jr, plays his friend, Marty “Mart” Waterman, and the only one who has some measure of control over Sam.

Helen Brent is a woman who has nothing and wants everything. She lives off her younger sister’s wealth, her father left her his newspaper and a fortune. The two sisters had the

The pair meet in Reno where Helen had established a six week residence for a quick divorce so she can marry the rich man she’d hooked. She’s staying at a rooming house for women run by Mrs. Kraft. When she gets the divorce finalized, she’s paying off the landlady and plans to leave in the morning. A neighbor, young Laury Palmer is regaling them about her new beau, a big strong man. and her plans to go out with her old boyfriend to prod him a bit. She first lays eyes on Wild at a casino where he’s shooting craps and she’s playing along. Laury stops by with her date to say hello and that’s when we realize Wild is the new man.

In short order, Wild follows the couple to Laury’s home, kills the boyfriend, then her when she walks in on the murder, confesses to ‘Mart,’ who sends him to San Francisco to lay low while he sees how an investigation goes.

Helen Brent is headed back to the boarding house to pack up for the leave in the morning when she finds Laury’s dog loose in the streets. Taking him home, she finds the two bodies and starts to call the police, changes her mind, and calls the train station about a train to San Francisco. One’s heading out soon, so she hustles up, gets her bag, and rushes to the station.

That’s where the pair formally meet.

The ride to San Francisco forges a relationship that can only end badly.

Helen is drawn to him, but wants the soft life, and the money, with her rich fiance. When she introduces Wild to her young sister, Wild latches on to her, much to Helen’s consternation, and it soon looks like a wedding is imminent.

The newlyweds are soon arguing. he wants to run the newspaper, she wants him to start as a desk jockey until he learns the business. Helen loves her sister and sees what’s coming. She still wants Wild, but wants her own money and teased him with rushed moments in the big house.

Now where does the other main star, Walter Slezak, fit into all this. He’s a private eye,Matthew Albert Arnett, hired by Mrs. Baker, the landlady, who wants Laury’s murderer

found. She loved the young girl even before she learned she was the heir to the house and some money. A happy-go-lucky drunk, she loves her beer, she strikes a deal with Arnett for five hundred dollars. We never see how he gets on to Wild, but he’s soon in San Francisco and at the wedding nosing around. When Helen approaches him later to buy him off, his character is revealed. “I’m an ethical man, but I’ll listen to any reasonable offer.”

Things go downhill fast. Mart is asked to move into the mansion by Helen to be near his friend. Mrs. Baker shows up in San Francisco to be there when the killer is nabbed. More murders occur and Helen is degenerating fast, threatening Mrs. Baker(who’s already had one murder attempt) if she doesn’t drop the matter, and deciding to tell her sister the truth.

An interesting film and we won’t go into the finale, quite exciting.

For more overlooked movies, check in on Todd Mason over at SWEET FREEDOM for all the latest every Tuesday.