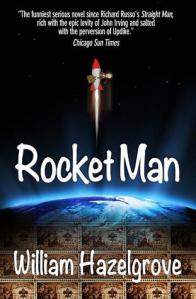 To be honest, I wasn’t sure how I would view this novel as I read it. It’s been years since I read much of anything but genre novels. But ROCKET MAN caught me up in it early and I was disappointed when it ended.

I was immersed in the life of Dale Hammer, a man living the life of the middle class: wife and two kids, big car, a big house in the suburbs, the perfect life.

Almost. He also has the big mortgage, a failing marriage, children constantly in turmoil, a day job about to end, a father thrown out of his third marriage, his job lost, and come tyo live with his oldest son. He’s a mid-list author of four novels, none in the last seven years. Oh, he hasn’t stopped writing, but nothing has emerged worthy.

The pressures of life you know.

Being Rocket Man for the scout troops of the area is one thing he hopes will reignite things. Even there there are problems though. An officious man at the top.

I quite enjoyed this one. I wasn’t familiar with Hazelgrove’s work before, this is his fourth novel, but I think I want to see more.

Recommended and can be found HERE.