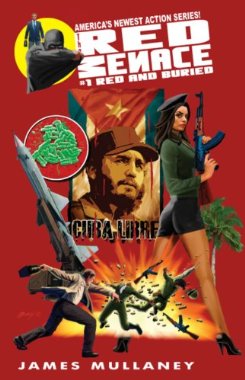 In the world of 1972, Patrick “Podge” Becket had gotten rich in the burgeoning world of computers and the Security business, setting up the movers and shakers of the world as long as they weren’t enemies of America. But back in the fifties he’d been something else.

Who was The Red Menace? That was the question on every Communist leader’s lips during that period. He popped up all over wearing the black cape and mask with a disturbing tendency o turn red at odd moments and stopping whatever scheme had been planned to end democracy.

But things change and he’d retired young to lead his own life.

But now a ghost from the past has popped up in Cuba and an old comrade of Becket’s had died to get that message out. Becket’s old organization had called him out of retirement to deal with it. Twelve years older and a lot smarter, his loyalty was still there. A Russian presence so close to America was intolerable.

Along with his partner, Dr. Thaddeus Wainright, he has to figure a way to get into the country and stop whatever was going on.

A fast program to get him back into Red Menace shape is undertaken. The first time he dons the cape and mask, Becket realizes just how arrogant his younger self had been. He looked positively ridiculous in the costume. Ah well.

We don’t know a lot about either man at this point, but hints are dropped throughout that neither is an ordinary agent/spy or just a costumed athlete. One assumes more will be revealed as the series progresses.

Jim Mullaney, the author, either wrote or co-wrote(with Warren Murphy) the better novels in the last ten years or so of THE DESTROYER’s publication history. This has the same style and panache as that adventure series.

I look forward to the next one due on February 14th.

A paperback for this fine book can be had HERE.