DESTINATION MURDER is the story of a daughter out to find her father’s killer. She doesn’t feel the police are doing enough. We know who the actual killer is right from the start. Jackie Wales(Stanley Clemens) is at the movies with a young woman. A five minute intermission between pictures allows him to step outside for a smoke. A black Cadillac pulls up, he jumps in and dons his delivery jacket and cap. We never see or hear the driver speak as Wales is handed a gun.

A short drive, Wales knocks at the door, package in hand, asks if the old man who answers is Mansfield, then shoots him when he says yes. The daughter, Laura Mansfield(Joyce Mackenzie) rushes to the door at the shot in time to see the back of the man jump into the Cadillac and speed off, dropping him back at the theater in time to pick up popcorn for the next film.

One immediate suspect is Frank Niles(John Dehner), a business rival of Mansfield who also owns a black Cadillac, 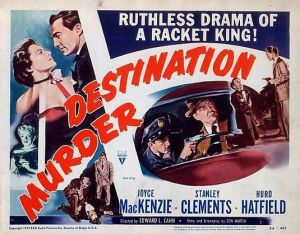 Laura faces a lineup of delivery men, front, back, and sideways. She identifies three possibles, all three claim to have been at the movies. Wales even says he has a girl that can prove it. All three are released, as well as Niles.

Laura is incensed and goes undercover, getting picked up by Wales while pretending to look for a cab. She soon realizes he’s the killer she’s looking for, but the police say they can’t do anything. Police Lt. Brewster(James Flavin) warns Laura that these are criminals she’s messing with, dangerous criminals. She begins dating Wales, he spends money on her, loses at a gambling joint, then goes to see his pal, Armitage(Albert Dekker), the driver of the Cadillac the night of the murder. He wants more money, but only gets a beating before being tossed out by Stretch Norton(Hurd Hatfield), the manager of Armitage’s club. When he staggers back to the car beat up, he fell down stairs, Laura gets her next clue. 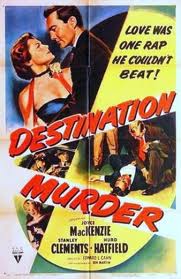 Wangling her way into a cigarette girl job, she keeps her ears open. The Lieutenant keeps warning her, she keeps getting in the way, until he’s forced to admit they don;t really want Wales. They want who hired him and they are not satisfied it’s Armitage.

Wales ends up dead, as does Armitage’s fiance, Alice Wentworth(Myrna Dell), who puts Wales up to blackmail with an incriminating letter laying it all out. Laura makes a mistake when she begins to fall for Stretch, and the plan the cops had set up with Niles falls apart.

Not a bad film.

For more overlooked movies and related items, drop in at SWEET FREEDOM on Tuedays.