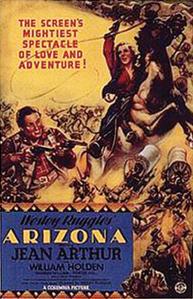 Jean Arthur is Phoebe Titus, an ambitious pioneer woman with long range plans and William Holden is Peter Muncie, a drifter who happens into Tucson in the Arizona territory where the pair meet. Phoebe is making a living making and selling pies. But her long range plan is to own the biggest cattle ranch in the territory. Muncie is taken with her and begins a courtship, plunking a banjo and serenading her one night. She becomes quite taken with him as well.

Because there’s a freight operator, Lazarus Ward(Peter Hall) gouging folks, Phoebe teams up with general store owner, Solomon Warner(Paul Harvey), to start a new freight company that will offer fair prices. Phoebe wants Muncie to head up the four wagon train for them, but he has other ideas. He has a yen to see California and has joined a wagon train headed west. he promises when the wanderlust is done he will be back. 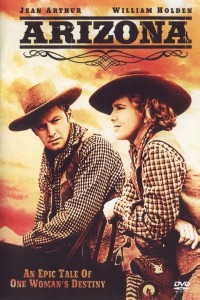 In the next year that passes, the Union troops pull out to head East to join in the war with the south, the Confederacy briefly takes control before pulling out, and a man named Jefferson Carteret(Warren William) shows. Carteret is sort of an early version of a carpetbagger, out to make easy money on the backs of people that work for theirs. He ends up partnering with Lazarus Ward.

A troop of Union soldiers pull in from California and Muncie is a sergeant with them. His hitch is almost up and he’s now ready to settle down. Phoebe is still interested, but is taken with Carteret as well. 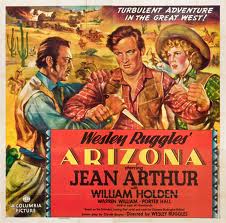 Phoebe has already started building her ranch and increasing her freight business. She lands a contract with the army delivering to them, temporarily derailed by Carteret and Ward’s efforts to paint her as a Confederate sympathizer, then she plans to send him to Nebraska to buy five hundred head of cattle with fifteen thousand she’d saved. Just before he’s to leave, three outlaw break into her home, blow the safe, and take her money.

Stuck now, she’s visited the next day by Carteret with an offer to loan her the 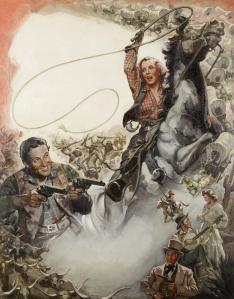 money, with suitable interest of course, and her ranch and freight business as collateral. Not suspicious that he would suddenly have the money to get her out of the spot all of a sudden, a man never seen doing anything but hanging out at Ward’s bar., she finally realizes what the truth must be.

Ward and Carteret are determined that Muncie will never get back with the cattle. We get an Indian raid and a stampede in the midst of it, then the pair are married and Muncie goes looking for Carteret as soon as the wedding is over. He asks Solomon to open his store where Phoebe can wait while he takes care of business. Carteret has murdered everybody that can prove anything and is ready for the showdown.

I liked the way they handled it. At the general store, Phoebe, in her wedding dress, is ordering supplies for the ranch in the middle of gunfire we here, flinching with every shot. I suppose it was because she was the big star of the film. Holden was a mere stripling of twenty-two at the time of the film. Arthur was forty.

For more overlooked movies, check out SWEET FREEDOM on Tuesdays.