THE SILENT STRANGER, also released in English countries as The Horseman and The Samurai, has a checkered past. After the success of the first two Stranger films(A Stranger in Town, which I haven’t found yet, and The Stranger Returns, which I covered last Saturday), A third film was asked for and actor Tony Anthony had the idea of mixing East-West cultures, a revolutionary idea in 1968 when the film was made. But years of wrangling over rights between MGM and Anthony’s producer made it 1974 before it finally got release and it was then just another spaghetti with Samurai elements..

Production was beset by a number of typhoons and a good portion of the film was shot in driving rain. Anthony said it was the toughest movie he ever made. And the final cut was edited without Anthony’s consent.

I think I saw where.

In the opening sequence set in the Klondike area in 1884, we see the Stranger on foot plunging through huge snowdrifts yelling someone’s name. Then all of a sudden we’re in a barn where an Oriental in western garb is fighting with three men. They shoot and strip him, looking for something in his clothes. All of a sudden, the Stranger swings from the upper region of the barn, looping the three men with a snare and leaving them hanging.

The Oriental man is dying and begs the Stranger to get a scroll, hidden inside the handle of a dagger to a Matori in Japan. “Twenty thousand dollars will be paid for delivery. Then he dies. The three men jeer and ask if he believes those lies, then offer him five thousand for the small scroll. When he counts the money, he says, “Now I believe it.”

long months to get to Japan. One of the few humorous bits is here where he learns he’s adapted to rolling ships and staggers drunkenly around until he re-adapts. The same for his horse Pussy which he brought with him. 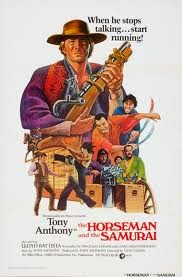 He soon gets involved with two factions warring for control of the area he headed. “Uncle” Matori rules in the name of the Little Princess, a young girl who’s the real ruler. I guess that makes him regent until she comes of age. Cousin(and here, even the IMDb credits are murky; not a lot of character names and what actor played what role) leads the other faction and collects taxes from the people in the Little Princess’s name. Though she doesn’t see a bit of it.

We learn the scroll is worth a million dollars, but not why until the very end. The Stranger delivers as romised and is paid off, as it turns out in counterfeit coins . He’s offered 200 lios(not sure of that spelling), twenty thousand, to kill the cousin. Cousin offers the same amount to kill Uncle.

The Little Princess is the only truly innocent one in the film. She speaks English and gives our hero a little grounding. You know, the old fish out of water stereotype.

The Samurai of one version of the title is the only other decent fellow in Japan. Doesn’t seem so at first though. He captures the Stranger, the Stranger regains control, they bond together when Cousin comes in and starts collecting taxes. He maintains control with a Gatling type gun fird by an American working with him. Lloyd  Battista has that role.

The film was directed by Luigi Vanza, the music by Stelvio Cipriani, and the excellent cinematography was by Mario Capriotti.

The version I saw was on Youtube and was titled The Horseman and The Samurai. But the actual film was the German version and had the title Der Schrecken Von Kung Fu.