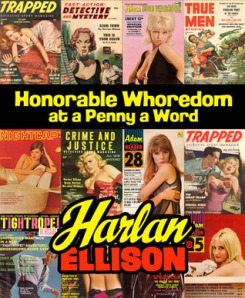 Sixteen never before collected stories from Mr.Ellison’s early years as a writer. Most appeared in ’56-’57(his first sale was in ’55), though there are a few from the sixties.All but one crime stories, they all appeared in detective magazines, as well as a few “skin” periodicals. The cover is made up of a few of them. you can see his name on the covers of the detectve fiction mags, but not the skins(but then fiction wasn’t the star in them).

Jason Davis is the editor of the set. Mr Ellison gave hin a list of stories to choose from. They were in order, including the writer’s title, the published title , the venue, and what he was paid.

The title was Ellison’s and not strictly accurate. One story he got a half cent, another a cent and a half, and one to a slick publication for a nickel. But …at a penny word sounds so much better than at various rates a word.

Three stories feature Jerry Killian(pronounced kill-ee-un, he has a thing about that), ex-insurance investigator, ex-private eye, now working for a business protection agency. Another starred Big John Novak, a P.I. that gets blackmailed(*threats of lifting his license and pulling his gun caeey permit) by the police into assaulting an impregnable building to get a gunman that had killed five cops and shot a dozen other prople. You see, Big John had a talent the cops didn’t: he was three feet two inches tall.

Me. Ellison said he had intentions a rinning series of Big John tales(he was an adnirer of Rhird Prather’s Shell Scott tales and loved the way Richard Matheson captured the troubles a small person had in a life sized world).

The one story not a crime story. SADDLE TRAMP is a western. Ellison said he pretty much steered away from the western genre because of his admiration for Steve Frazee, Ernest Haycox, and Louis L’Amour. None og those stalwarts would have written this one.

And finally, there’s two versions of the one story: Ellison original and after turning a critical eye on it, the revised version that sold. He cuts some three thousand words from it.

A nice set. We see a young writer honing his craft and making a living while doing it.