Giuliano Gemma had starred in Italian cinema for a few years before entering the burgeoning field of the Euro western(not yet known as spaghetti westerns) when he made A PISTOL FOR RINGO in 1965. BLOOD FOR A SILVER DOLLAR was his second entry later the same year. As was the custom in those early years, most actors adopted more American sounding names for the English language market. Gemma was Montgomery Wood for his first few films.

Here he’s Gary O’Hara, a Confederate soldier during the war being released along with his brother Phil(Nazzareno Zamperla, billed as Nicholas St. John) after surrender. Though given handguns, the brothers are dismayed to learn the barrels had been sawed off, making them virtually useless.

billed as Evelyn Stewart) in Richmond. Phil gives him a key to a small strongbox, telling him to use the cash ibside, and promises to leave word in a town called Yellowstone in case Judy and he change their minds about staying back East.

Gary soon learns how bad things are and heads out to find Phil, promising to send for Judy when he gets established. He leaves her Phil’s money, except for one silver dollar. He ends up losing his horse, broken leg, and walks into Yellowstone looking for work. Southerners are not very popular because there is apparently a gang of rebel outlaws harassing the farmers in the area. He finagles a job with the local banker, McCoy(Pierre Cressoy, billed as Peter Cross), who wants him to arrest a gunman coming to run him out of town. The deal is a small plot of land and five hundred dollars cash, half now. Before the arrest, Gary writes a letter to Judy, with the cash, explaining it all, and gets it off. 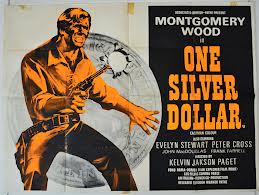 At the last instant, Black Jack drinking at the bar, back to Gary, he recognizes Phil, and calls out. Phil, spinning, shoots Gary and is in turn cut down by McCoy’s men.

We start to get the truth then. McCoy has been bleeding the farmers, the rebel outlaws are his and not really rebels. He holds the mortgages and wants their land.

The brothers are presumed dead and dumped into a pioneer couple,

Southerners, passing through. It urns out Gary is not dead, Phil’s bullet having clipped that silver dollar. It becomes a revenge plot from that point, Gary finding out from the farmers that Phil had found some kind of proof of what was going on. His mission is to find it and stop McCoy.

Of course things get complicated when Judy arrives and is taken by McCoy.

Not a bad western.