In my late teenage years, one of the local television stations had a late Saturday night movie called Shock Theater which showed old horror and science fiction movies, usually drive-in fare in their heyday. It was hosted by Dick Bennick in his guise as Dr, Paul Bearer. It was on a few years and then stopped. I didn’t learn until a few years ago that he, and his character, migrated to Florida, becoming a cult favorite for a twenty year run.

I was reminded of it recently when Me-TV’s version, SVENGOOLIE, ran the first movie as part of it’s line-up. I’d never seen it before and enjoyed the brief return to my teenage years.

One thing different about this movie was our giant insect wasn’t the result of humanity messing with atomic power, a popular excuse in those monster movie years for giant animals and insects.

This one was the frozen in an iceberg prehistoric version of modern Praying Mantis, come back to life when a chunk of iceberg broke off and melted in warmer waters.

The two big stars were much better known for television roles. Craig Stevens plays Col. Joe Parkman, the boss of the DEW Line Project(Distant Early Warning) in the Arctic. He of course was Peter Gunn in the P.I. series. William Harper is Dr. Ned Jackson, a paleontologist that specialized in prehistoric plant and animal life to identify what ws destroying outposts and downing planes and making off with human bodies. Hopper was a P.I. on TV also, Paul Drake on the Perry Mason series.

a lot of fun 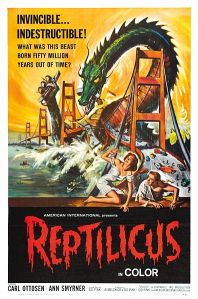 Reptilicus wasn’t quite a fifties monster movie, but close enough. It was also similar in that a frozen reptile was found in the far north aboce the Arctic Circle by copper miners. Only the tale was found and brought to Copenhagen where, when an accident happens, it thaws and instead of rotting, it heals and begins to grow a new monster.

A Danish-American co-production, two versions were film, one in Danish, the other English. The same cast was used for both with a couple of exceptions. American International deemed the English version unreleasable and had it extensively reworked over director Sidney Pink’s objections(he later sued). Scenes were reworked, some dropped, others rearranged. The monster flew in the Danish version. That scene was dropped and cheesy special effects used that had him spew corrosive green slime from his mouth. We never saw what it did, just a scene suddenly enveloped in green slime.

A bit goofy, but fun.