In the usual fashion of films in this genre, attempts were made to trade off of other popular movies of the time. There is neither a character named Ringo here or one who rides alone. The original title, the English one anyway, gives away one salient plot point only revealed at the very end.

TWO BROTHERS, ONE DEATH is set two years after the nd of the Civil War, a point made when two characters discuss an old battle in 1847, twenty years in the past, This throws historical accuracy out the window as the outlaw band causing havoc is led by Bloody Bill Anderson, a man who was killed in 1864. He’s also not the psychopath the real Bloody Bill was, letting a number of folks survive encounters with the band.

The outlaws have pretty much decimated Springfield, Missouri and the

townspeople are fed up. They call on the Pinkertons for help, but, owing to the nature of the way the agency works, are unsure whether thet are on the job. It’s agents are unknown and like to work undercover.

Two mysterious characters arrive in the area about the same time.

Piero Lulli is Dan Samuelson, a man in a suit that arrives in town nearly passed out drunk on his horse. He immediately buys everyone in the saloon a beer and gives his story. The black sheep of a prominent Boston family in the hardware business, Dan is a man who wants nothing to do with that and is headed west to make his fortune in gold.

The second fellow is a man we see spying on the goings on from afar, witnessing a stage holdup and a posse snatched up by the Anderson gang. He saves two men taken from the posses because Anderson, or none of his band, know them. The rest of the townsmen are released and the pair kept are about to be hung after being beaten, A bullet from the stranger kills the hangman and the gang grabs him.

The IMDb lists the character as Ringo, but we get the name Bill in the film, Pietro Martellanza, billed as Peter Martell, handles that role. He’s saved from death by the youngest member of the band Michael, aka The Kid(Paolo Herzl), who convinces Anderson to let him go, saying he owes him his life from 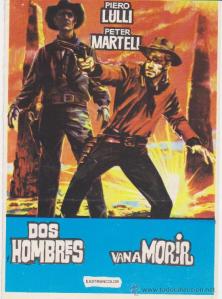 an incident in the war. The kid seems to be playing at being an outlaw more than anything, not wanting to kill innocent people.

Are Dan and Michael Pinkertons? It’s never made quite clear, Dan claiming to be after the reward and Michael obviously has a personal reason.

A likeable western. In looking around the spaghetti western community, opinion seems divided, everything from “entertaining but routine” to “tries to hard to be an American western” to “a hidden gem.” It wasn’t the best I’ve seen in this genre, but far from the worst.

1 thought on “Two Brothers, One Death(Dos Hombres Van A Morir)1968”