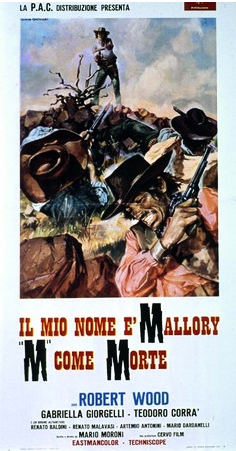 At a screening of the first one, he noticed immediately they’d left the S off in the credits. Too late to do anything about it and he was stuck ever after as Robert Wood.

In this one, he plays a half breed named Larry Mallory, though no one ever uses Larry in the film, who’s partnered with Colonel Todd Hasper(Renato Baldini). The pair are bossing a cattle drive, the first one I ever remember in a spaghetti western. They’e carrying something more in the bed of one wagon: gold coins to buy a ranch.

The Colonel wants to foil a man named Bart Ambler(Teodoro Corrà), who’d romanced his sister while the Colonel was away during the war, got a bunch of money off her, then murdered her. Ambler had been traced to Texas and contacts had informed them he was raising the money to buy back the old Ambler family ranch. The man had told his sister Cora(Gabriella Giorgelli) it was for sentimental reasons, but it was because the railroad was coming through in a couple of years.

Mallory and the Colonel intended to beat him to the punch.

Ambler is a ruthless man. The family had been rich and ruled the town. He intended to get that power back. But until then, he had to move carefully. His reputation was so bad, he couldn’t kill anybody, even in self defense. That was what his gun hands were for. one in particular. Block Stone(Artemio Antonini). Yes that’s the name.He’d once ran Stone out of town, after having him beaten for making a pass at his sister. Stone had most recently been fired off the trail drive by Mallory.

After a number of men sent by Ambler to get Mallory had been killed in the attempt, Ambler isn’t above using Stone to kill Ambler> He;d promised his sister he wouldn’t kill Mallory.

The two young one were falling for each other much against each’s will. Cora hated violence and believed Mallory a ruthless gun man. Mallory didn’t quite trust Cora at first.

A decent little western that was released in some English markets under the literal translation of the Italian title, My Name Is Mallory…M Means Death. 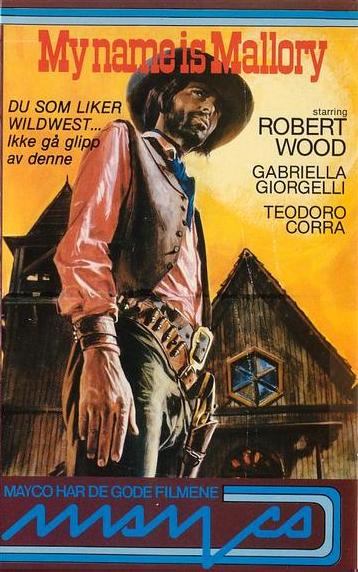