This was director Tanio Boccia’s second spaghetti western. He was occasionally 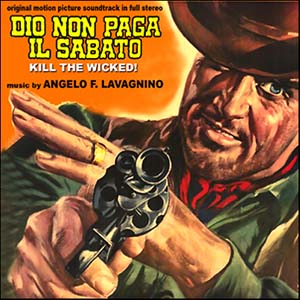 called the Italian Roger Corman for his ability to produce fast, cheap films. While I’ve seen a great many spaghettis over the last few years, I recognized not a single actor from any previous film. There’s not much character development, just a lot of shooting, fires, and a decently staged finale.

Larry Ward was an American actor who’d appeared mostly in TV westerns and looked like a regular joe, comfortable as a townsman, but hardly hero material. Though top-billed, he actually has less screen time than most of the other actors. His

character, Ben Hudson, appears a third of the way into the film, a man with a white horse who responds to whistle commands and no water. The only hint we get about a past is that he made the decision to stop wearing a gun. He comes upon a young woman with a wrecked wagon and a dying horse. Judy(Daniela Igliozzi) is her name and the only thing said about her past is that her husband died of a fever(we see her earlier with a pick and shovel).

The other American actor, Rod Dana(billed as Robert Mark), plays an outlaw named Randall, who disappears early, shot in a stage hold-up, only to reappear at the end with revenge on his mind against the rest of the gang. For one who appeared nearly dead, the reason for the abandonment, he’s surprisingly hale and hearty.

Randall and Ladlan(Massimo Righi, billed as Max Dean) had rescued

Braddock(Furio Meniconi, billed as Men Fury) from a hanging at the beginning. They are joined in a ghost town by Shelley(María Silva), a gorgeous redhead where they plan a stage robbery. Braddock and Randall don’t really like each other. Both want Shelley, who, while she seems to prefer Randall, goes where the money is.

After the hold-up, where they leave the wounded Randall and stop at a second ghost town to hold up a few days before slipping across the border. We learn very quickly they are not alone. At first all we see are folded arms slipping around the town, stealing a Winchester and a box of ammo, then it’s revealed an older woman when she watches Braddock hide the strongbox from the holdup. Molly Verner(Vivi Gioi) had once been wealthy until the town had collapsed. She’d stayed on alone.

The stage is set.

Hudson and Judy ride into town, intent on getting some rest, where they are taken by Braddock. He doesn’t believe their story and goes to check out the wrecked wagon, leaving Hudson tied and in charge of Ladlan with orders that he be alive when they return. We’ve already seen that Ladlan is not tightly wound and he immediately stars beating Hudson with a gun belt. Hudson only gets the upper hand by a whistle command to his horse.

The finale features a cat-fight, a lot of dead bodies, and a gun battle, all among a burning town.

A lot of action, no character development, and a musical score by Angelo Francesco Lavagnino that’s pretty decent. Not a bad film overall, about a B-.

Finally, the translation of the Italian title is God doesn’t pay on Saturday, referring to an old Italian custom of paying wages on Saturday night.