The Italian title translates literally as THE GUNMAN MARKED BY GOD. As usual, 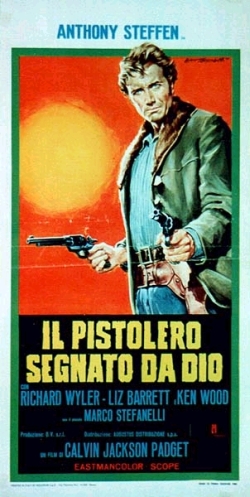 it had a variety of different titles depending on the market to which it was released. In the U.S. alone, it appeared under GUNMAN SENT BY GOD, TWO GUNS AND A COWARD, and TWO PISTOLS AND A COWARD. It’s a film of revenge, cowardice, and redemption.

Anthony Steffen(real name Antonio De Teffè) is Gary Maguire, professional name Tornado West, a trick shot artist traveling with a small circus. Gary is quite adept at handling setups with his two gun rig. But the real thing, violence, brings up a psychological block in him dating back to childhood. Then practicing twirling guns, one goes off and stampedes a herd of cattle, taking the life of his older brother. His father was so infuriated he struck him across the neck, leaving a livid scar there(hence the Italian title). He freezes up when confronted by real violence. 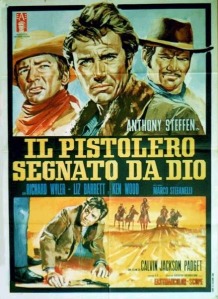 Tony Murphy( Marco Stefanelli) is a young boy who idolizes the circus performer. Tony had seen his father murdered by a masked gunman a few years before during a raid on the family ranch. He’s being raised by foster parents to be the proper young gentleman. Just before his father was murdered, he’d hidden a box with $30,000 dollars and told Tony it was his. No one else knew where it was hid.

A bank robbery happens and Gary is recuited for the posse. When they find the robbers splitting the money, the Sheriff goes to fetch the posse, leaving Gary to watch over them. He sees the leader, Roy Elroy(Giovanni Cianfriglia, billed as Ken Wood) shoot them all down, leaving with the money. Gary hides fearfully as all that happens. When he’s credited with killing the five, he’s to ashamed to admit the truth and becomes the toast of the town. 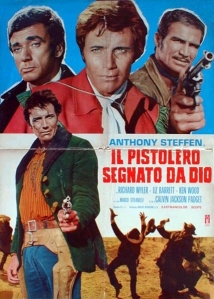 performance that night when a challenger is called for oversteps the shill to take on Gary. Gary knows right away who he is and loses the contest because of nervousness. Elroy takes every opportunity to humiliate him. Such that Gary quits the circus and goes on a bender.

Young Tony wants him to help get his ranch back. He’s overheard by a prostitute telling Gary about the hidden thirty thousand and goes straight to the man who’s murdered the boy’s father, a crooked rancher named Coleman(Richard Wyler). The boy is taken by Elroy, who works for Coleman, and is t be tortured for the hidden fortune.

That’s when Gary has to pull himself together and rescue the boy. The only jarring note in the finale was the reappearance of the circus, left behind early in the film, shoing up at the ranch in the nick of time.

I’d rate this one about a C. Not the worst I’ve seen, but not near the top. 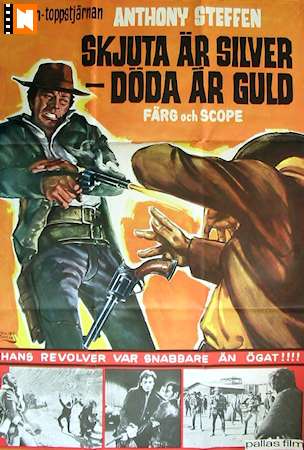