ARIZONA COLT RETURNS was somewhat of a disappointment for several 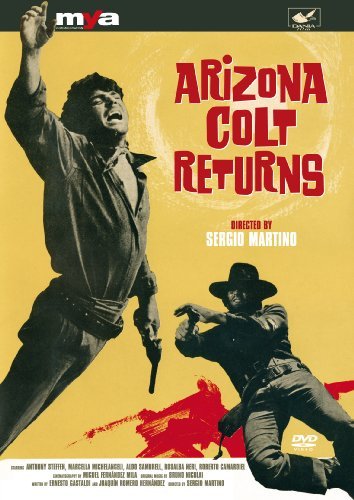 reasons. The first film, which I covered this past Tuesday, starred Giuliano Gemma in the title role. Anthony Steffen takes it in this one and, while he was almost as big a star in the genre, he seemed a bit off his game in this one. Kind of uninspired acting. Part of it I’m sure was the actor’s voice for the English translation. Too deep and not a lot of expression voicing the words.

Two actors from the first film appeared in this one. Roberto Carmardiel again played the comic sidekick Double Whiskey, though he didn’t

do much but drink a lot of alcohol in this one. He was an explosive expert last time around and a much meatier part. The second actor was Rosalba Neri, though with a different role this time, Paloma, the girl friend of the outlaw leader behind the plot.

Chico(Aldo Sambrell) takes a stage coach full of gold, murders all those aboard but one and he swears it was Arizona Colt who’d hit them. It’s a frame-up, the witness actually a member of the gang. An old enemy of Arizona’s, he takes great delight in setting him up.

Arizona visits the Sheriff and informs him that “if let alone, I’ll deliver the real 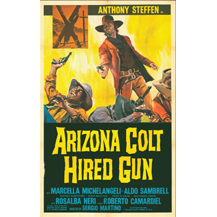 killers in twenty-four hours!” Not that easy though. After a fight in the saloon(it seems a prerequisite of spaghetti westerns that there must be a full out brawl in the bar) lands him in jail. A quick trial and a hanging is scheduled. But a trick rig and the help of some friends helps him avoid death and sets him loose to find the real killers. He’s also offered a deal by the father of Paloma, fifty grand for Chico’s head and his daughter back. Arizona turns him down.

Double Whiskey is grabbed and, when he manages to escape, is shot at. Arizona finds him in the river, several bullets in him, and not given a chance to live. That pisses Arizona off and the old man manages to get out where the gang is headquartered.

A neat trick distracts the gang, money floating down the river. The gang rushes to gather up the bills and lets Arizona steal the two trunks of gold from the stage holdup and hide them. He’s only caught when Paloma double crosses him.

Torture doesn’t work, but the murder of his girl friend Sheila(Marcella Michelangeli) does. She manages to crawl over and cut him loose with the very knife that Chico stabbed her with before she dies.

That sets up the gum battle in the valley. One thing I did like about the fight scene. Arizona is shown loading his six shooter a number of times in the battle, something one doesn’t always see.

Grade about a C-.