$1000 ON THE BLACK is the story of two brothers, one who served time in prison for something he didn’t do, the other the one who actually committed the crime, and their spiteful mother, Rhonda(Carla Calò, billed as Caroll Brown) who despite her hatred of the town and everyone in it, is the only thing that keeps them from killing each other. Openly at any rate.

Johnny Liston(Anthony Steffen) comes home from twelve years in prison for the murder of a rancher named Edward Rogers. The trial had been a quick one and he was sentenced to hang, a verdict that would have been carried out but for the intervention of a Federal Marshal that happened along. he received a real trial and because the evidence against him was only circumstantial(the murdered man’s empty wallet was found in the same barn that Johnny was sleeping), he got twelve years only.

On his way home, Johnny is fired upon from a cliff and plays dead

until two men come down, gloating. At the right moment, Johnny comes back to life and beats them in a fist fight. He eschews a chance to kill them outright, he’d seen enough killing in his day, letting them leave walking barefoot in the desert. We learn later that the pair were sent by Sartana Liston(Gianni Garko), Johnny’s brother. This is not the Sartana he played in four of a five film series later, billed by then as John Garko. 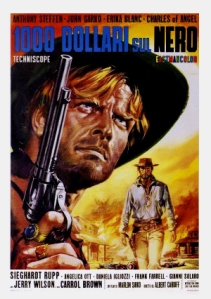 Things are much changed in town from before Johnny went away. His brother Sartana runs a protection racket in the towns in the valley, protecting them from outlaws. Such as himself and the army of cutthroats he controls. The Liston family had been poor back then. Now mother lives in the biggest mansion in town, waited on by servants, all fueled by the tribute Sartana collects from the various towns. Johnny also learns his fiance, Manuela(Angelica Ott) as his wife and his brother-in-law, Jerry(Roberto Miali, billed as Jerry Wilson), a mute as his personal slave. Johnny remembers Jerry as a boy before he went to prison as a happy kid who could talk.

Johnny sets out to protect the townspeople, even Joselita(Erika Blanc), the

daughter of the man he supposedly murdered, despite her hatred of him. At first. She gradually comes to believe in Johnny, despite the oratory skills of the first judge who’d sentenced Johnny to hang. Judge Waldorf Wood(Carlo D’Angelo, billed as Charles Angel), secretly a partner with Sartana, continually sways the townspeople against Johnny and starts Joselita to once more doubting our hero.

With only the help of mute Jerry, who’d already planned his own revenge against his tormentor, Johnny must somehow prove his innocence and rally the various towns against the depredations of his own brother.

Not a bad movie, though the ending left me unsatisfied. They left unresolved the romantic triangle between Johnny and the two women in his life, Manuela and Joselita who he’d begun to have feelings toward.

As was the practice in English speaking countries, this film’s title in Great Britian was BLOOD AT SUNDOWN.