AMC ran a John Wayne marathon, mostly westerns, over the holidays and I 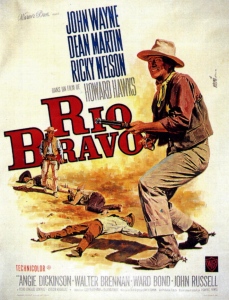 caught RIO BRAVO Christmas Eve. It is one of my favorites and I think the best of the trio of films Howard Hawkes made with the same basic plot, with John Wayne the only consistent star in all three. It was based on a short story, Rio Bravo by B. H. McCampbell, with the script written by Jules Furthman and Leigh Brackett. Brackett also wrote the scripts for the remakes, El Dorado and Rio Lobo.

The plot is Wayne as a sheriff holding a rich cattleman’s brother in jail awaiting a Marshal to pick him up on a murder charge. Claude Akin plays the reprobate brother. Wayne’s only help is an ex-, now alcoholic deputy, who let a woman turn him into a drunk, played by Dean

Martin and a crippled old man played by Walter Brennan. He’s later joined by an able young gunman played by teen heartthrob Ricky Nelson when his boss, Ward Bond, a friend of Wayne’s, is shot in the back.

A good portion of the film takes place within the walls of the jail as they take refuge to guard the prisoner. Brennan’s character rarely leaves the place and they eventually all hold up there as the cattleman’s men apply the pressure, and guns, to free the frankly no account brother.

Angie Dickinson plays a young gambling woman who falls for the burly sheriif and tries to help. Not to mention giving him a reason to survive. It ranks among 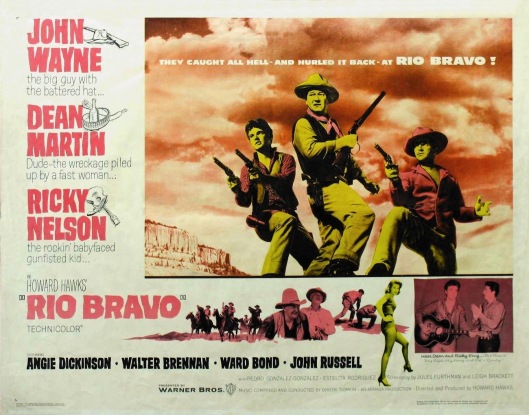