GENTLE ANNIE was based on a novel by MacKinlay Kantor, a writer of some repute. Thirty novels, most set during the Civil War, he received the Pulitzer Prize for Fiction in 1956 for his 1955 novel Andersonville. Never read the novel and the cover image below is really at odds with the character in the film.

Gentle Annie Goss is played by Marjorie Main(old Ma Kettle herself) and she lives on a farm they call the dust bowl with her two sons Cottonwood and Violet. Cotton is played by Harry Morgan, then billed as Henry, and Paul Langton as the wrongly named Violet. The farm is in Oklahoma and the time is 1901. Annie wants to return home to Missouri and to that end the boys are trying to raise money to buy their home back for her.

Somewhat amateurishly, they hold up a train and actually destroy most of the money when they use too much explosive blowing the strong box.

The Goss boys are suspected by the local sheriff, Tatum(Barton MacLane), but

without any proof, he can only keep an eye on them. Just a small step above the criminals of the area himself, he has somewhat of a bad reputation among the town as a lazy lawman, if not outright shady.

James Craig is lawman Lloyd Richland (aka Rich Williams), who comes into town disguised as a hobo riding the rails and is immediately jumped by the sheriff. When he gives Richland a hard time, the Goss brothers stick up for him.

Nosing around, Rich Williams learns of suspicion against the Goss brothers, though one drunk admits the third robber was a pigtailed “Injun” and the Goss boys had never been known to associate with them. “So they might be innocent.” 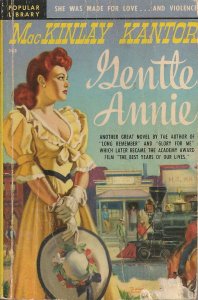 Donna Reed is Mary Lingen, a stranded woman working as a waitress trying to raise money for a ticket to St. Louis. The Goss boys, especially Violet, flirt with her and she rejects them politely. Sheriff Tatum takes rejection less good humorously than Violet and the two men get into a savage fight. About to shoot Violet, Richland jumps in and earns the enmity of Tatum. Tatum had shot the senior Goss in the back years before during a confrontation.

Richland likes the Gosses and Nary, all four allied now. Mary has quit her job and is living at the Goss farm, warmly welcomed by her. Tatum and his deputy are sneaking around, firing at the brothers, then fleeing. The Marshal is torn, liking the Goss family and falling for Mary, but evidence is slowly turning up the brothers were responsible for the train robbery.

It all comes to a head when the Gosses and Tatum go up against each other.

I liked this one.