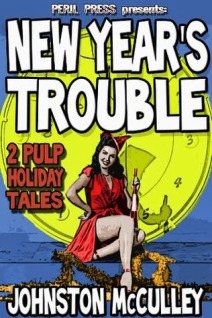 A couple of stories by the creator of Zorro set on New Year’s Eve. One crime tale and one western.
NEW YEAR’S PITFALL appeared in the January 1949 issue of Popular Detective: Lt. Keith Powry is investigating a jewelry theft ring when he gets a call from a nigh club manager informing him that a mistake had been made by a new employee and indeed a table for two was reserved for him.
Except Powry hadn’t called the club.
It seemed a set-up, but Powry and his partner wanted to smoke the gamg out.
NEW YEAR’S AT COYOTE CREEK appeared in the February, 1947 issue of Texas Rangers magazine” Miner Rusty Rawlins has been away, but returns in time for the New Year’s celebration with a prize more precious than gold.
The rest of the ebook is filled out with a mailbag for Texas Rangers magazine as well as a gallery of images, covers and interior illustrations from the issues concerned. 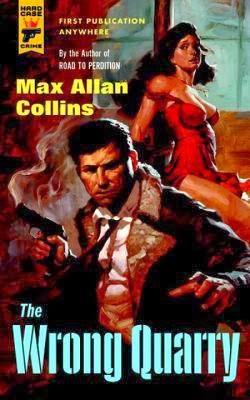 I’ve been a fan of Max Allan Collins ever since I discovered the Nathan Heller books during a low period in my life when I haunted the local library for a couple of years when the money got tight. Gradually I’ve filled in as many of the old titles as I could while keeping up with the new ones as they emerged.
The Quarry books are a particular favorite, the hitman turned-well not exactly an angel-but a man with his own system of honor.
Nowadays, armed with the Broker’s old list of hitmen, which he was once a part of, he makes his living finding them, watching for a target, and offering these folks protection. For a fee of course. He’ll get rid of the killers and find out who hired them. For another fee naturally.
Now in the small town of Stockwell, he finds himself involved in something more. And he goes about learning the truth in his usual methodical manner, all the while with an eye on his back.
Mr. Collins does his always superb job of building his story and surprising the reader more than once along the way.
Most excellent. Now all I need is to read the short stories that accompanied one edition of a novel in the series. I don’t think they’ve been released in another venue such as an ebook(hint, hint). THE WRONG QUARRY is due for release January 7, 2014.