When I first ran across this one, I immediately wondered who the real author might be. Jerry House gave me a clue. Craig Rice(Georgiana Ann Craig) is often reported as the author, though that claim can’t be verified. Gypsy Rose Lee, of course, is one of the more famous striptease dancers(from those days when it was more tease than strip), an actress, and I remember seeing her on a number of talk shows in her later years.

THE G-STRING MURDERS is of that class of mystery called cozies, where murders are usually committed off-scene with the bodies found after the fact. Gypsy Rose Lee and her boyfriend/sidekick, Biff Brannigan, a comic, are the defacto amateur sleuths who go about solving the crimes. It was first published in 1941, but the edition I have, pictured, is a Penguin release from 1984.

Gypsy takes a contract for the Old Opera theater(so named from it’s early days when it was a genuine opera stage) and now functioned as a burlesque house, showcasing strippers, comedians, song acts, all with that little bawdy edge. Always watchful for law enforcement, the ticket taker has a button that will cause a red light to blink backstage, a signal to tone down the acts as law or suspect people are coming inside.

It all starts when the police raid the place and the signal doesn’t happen. The lights are killed so the girls can make their escape and, in the confusion and dark, Gypsy feels a pair of hands go around her neck to start squeezing. When she screams, the hands are gone and she never knows who did the job. Biff dismisses her claim of attempted murder until the first body is found. Lolita La Verne is found strangled with her own G-string, locked in the new bathroom sealed with red wax until the unveiling. Though now cooled, there is a fingerprint set in the hardened shell blocking the lock. Gypsy is an immediate suspect when it’s revealed it’s hers, despit her explanation of finding the still warm wax and touching it.

friends either. Russell Rogers, Lolita’s boyfriend, Louie “The Grin” Grindero, a saloon owner, H. I. Moss, the Old Opera proprietor, Moey, an ex-racketeer who ran the concessions, and assorted others around the theater could be the ones as well. And Gypsy knows the Princess is not what she claims, remembering her from years before.

When the Princess turns up dead, again strangled with her G-string, things really heat up.

Not a great mystery, this one was a lot of fun for me. the ins and outs of that sort of life. In the interest of full disclosure, I know I had a female relative that worked this sort of life, though it was before my time and she was retired before I was born. Never even met her, just heard a few stories from mama. The novel was made into a 1943 film, LADY OF BURLESQUE, starring Barbara Stanwyck.

I have a second mystery featuring Gypsy titled MOTHER FINDS A BODY.

update: Robert Strom, author of Lady of Burlesque: The Career of Gypsy Rose Lee, left a comment apprising me of something I completely overlooked. This year marks the centennial of Gypsy Rose Lee’s birthday. Thanks, Mr. Strom! 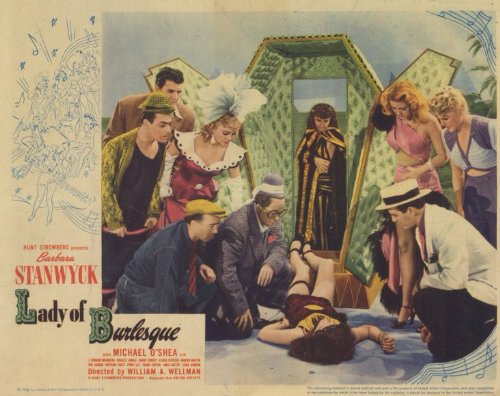 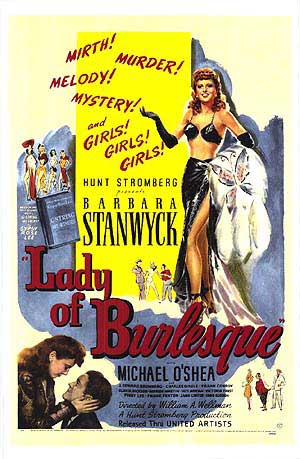