We come to the last two books in the series.

John Cutler, former law man, trapper of animals gone rogue. He has a wagon full of traps of all sizes for various predators, and the huge one specially designed by him for the most dangerous animal, the grizzly bear. The wagon is pulled by a matched set of mules named Kate and Emma. His gelding, Apache, so devoted that he follows the wagon without being tied, and the large Airedale, Big Red, rides alongside him on the wagon. 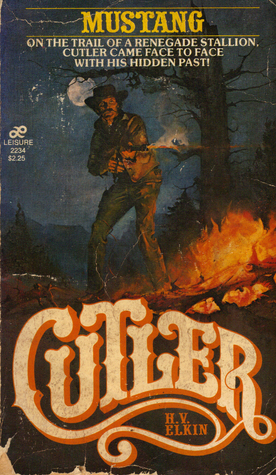 Cutler rides into the town of Thermopolis to meet a man about a job. The first folks he runs into are Butch and Sundance standing outside the Hole In The Wall saloon. He announces he’s looking for Dave Baker, you see him, send him over to the Irish saloon, a high class place, one of the four Iris Shannon owns in Wyoming territory. Butch says he’ll bring him over if he runs into him.

As luck would have it, iris was at the Irish, she makes a regular circuit of the four. They reconnect and he gets a bath, shave, and a new set of clothes. As per usual, the old are sent out to be burned.

Cutler doesn’t know what the job is about, Baker was closed mouthed in the telegram, but he soon learns when Butch brings a black man, Baker, into the Irish and the three set down for a drink and to discuss the job.

Baker is a small rancher and all the ranchers in his area are having a problem with a mustang stallion, they call Mesteno, who keeps raiding their ranches and adding mares to his harem. The animal aeems smarter than normal, at least all their efforts to capture him have come to naught, and Baker had convinced them to call in an expert.

Cutler’s not sure he wants the job. He understands freedom and he feels a kindred spirit in the magnificent stallion. But some elements want to shoot the mustang and all his mares, figuring they won’t be any good having returned to the wild.

He finally agrees the next morning and heads out with Baker.

Ben Harmon is the largest rancher. He wants the mustang captured, figuring it would be a valuable animal. His daughter,Ellen, a willful woman, wants it kept alive, spirit unbroken. The foreman, Tom Chase, of the ranch wants two things, Ellen and the horse dead. She wants nothing to do with him.

Cutler can’t use any of his many traps this time. A new plan is called for, But Chase keeps getting in his way. He senses Ellen is attracted to Cutler and he can’t have that.

Cutler heads to Langtry, Texas after reading a newspaper article, a couple of months old, that mentions his name and quotes a man claiming to have seen the grizzly he hunts down 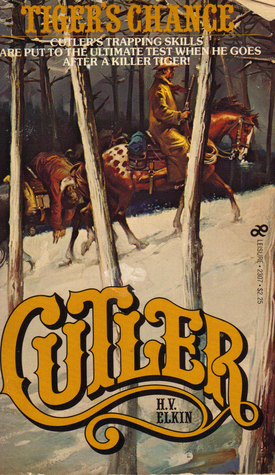 there. A long way from Wyoming territory, but it was a rogue that stayed constantly on the move. Best to check it out.

He arrives in time to find a circus, The Great Maroney Circus, doing shows. He also is just in time when one of the tigers, named Anna, goes berserk and leaps at the audience while doing a riding horse trick. He uses his .44 Colt, firing up into the air, to drive it back into it’s cage.

He learns from the owner and the young woman, Molly, that does trick riding, that the tiger had been especially restless of late. Eric Hansen, the big cat trainer, wasn’t very happy that Cutler had interfered and din’t hide it well.

Unknown to all concerned, Hansen had made a deal with Judge Roy bean the year before(not giving anything away here, the deal was made in chapter one before we ever see Cutler). Bean wanted Molly, who bore a striking resemblance to his obsession, the actress Lillie Langtry. The only way he could get her was to buy the circus. Hansen would run it for Bean.

Later that night, the tiger escapes, kills some of Bean’s sheep, and disappears into the hills. Hansen drags his feet, it’s obvious he’s not trying very hard, and Bean keeps getting in the way.

Everyone seems to want the tiger alive, Cutler included. He knows the big cats on the North American continent. Anna is four hundred pounds of muscle and fury, but there’s that spirit Cutler admires, shares.

It’s his job to recapture the animal, hindered by Hansen, Bean, and Bean’s youngest son, Sam, who fancies himself a gunman.

These were the last two books in the series. Don’t know why. Maybe they didn’t sell well. The Elkin books weren’t bad, but I’m a big Benteen fan and prefer those. I guess Cutler is still somewhere out there hunting his obsession, the big silver tip grizzly bear that killed his wife.

For more forgotten books, check out Patti Abbott at her blog, Pattinase on Fridays.

H. V. Elkin took over the Cutler series with book three and added four more to the tales of John Cutler. In part one last week,I mentioned I couldn’t find much on Elkin and James Reasoner filled me in on a comment(thanks James). Elkin was the pseudonym of Vernon Winkle. In addition to the four Cutler books, Winkle wrote a standalone under the Elkin name and two under his real name. That’s all apparently.

The capture the flavor of Benteen’s writing pretty well, down to describing his weaponry and equipment, a hallmark of Benteen’s westerns.

This one takes up a few months after the previous novel. It’s very early Spring, 1895, and Cutler is back up in the Bighorn Mountains looking for the grizzly that had killed his 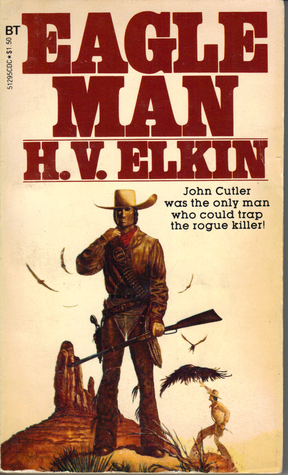 wife. Too late, Big Red, his huge Airedale, had tracked down the den and the missing left paw told Cutler it was the right one. The tracks end at a fresh avalanche, the trail lost again.

Back in Tenspeed visiting, a letter tracks him down from an old friend from his marshaling days asking for help with a problem. Wouldn’t talk about it in the letter. Come fast if he can. Since it was a man he owed his life to when he’d been a bit green, he headed there to see what was up.

In Oklahoma, he heads to Guthrie, one of the towns that grew up on account of the land rush of 1889, and to find his friend.

People were being found dead on their land claims, lying on the ground, their chests ripped apart by some sort of claws. No \footprints leading to or from the victims could be found. Some folks said it was an eagle, a big one, others said it was an Indian.

A different sort of problem than Cutler was used to, But one he wouldn’t shy away from.

A final note on the book. There’s a sub-plot early that involves a young farm boy, Bill Taylor, that has delusions of being a tough gunman who braces Cutler in the saloon. Cutler takes him down fairly gently, if you can call knocking a couple of teeth out gentle, and the pair become fast friends, Cutler even gives him a lesson in shooting and sends him back to the farm. He doesn’t appear again in the book, but does paly a prominent part in YELLOWSTONE below. 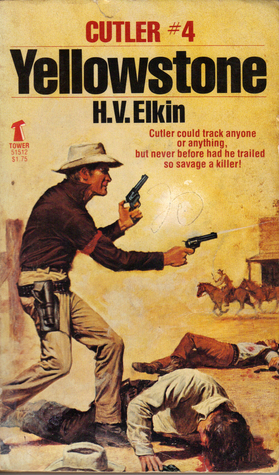 Cutler is in Cheyenne in response to a letter from Iris Shannon, the beautiful saloon owner. Word had come of a rogue grizzly up in Yellowstone, not the one he’d been searching for for years, and the federal government wanted help before the tourist traffic in the new national Park fell off.

Cutler had recently survived a rattlesnake bite and had been thinking of his own mortality lately.

He decides to take the job and heads out, planning to stop at the farm outside Tenspeed to visit his friend, young Bill Taylor. The boy had been practicing his draw and shooting and, after a day there and a couple of good meals, Cutler agrees to take him on as a partner. Bill’s parents were agreeable, knowing the boy had no future as a farmer, and that Cutler had already taught him valuable lessons about surviving.

When they arrive at the fort that guards the park, the Captain fills them in. The grizzly was one, along with more than a few grizzlies, that had gotten used to feeding off the trash heaps around the tourist hotel. When they were finally cleaned up, this one was the only one that continued to hang around. It raided homes and barns, wherever people lived, stealing food, and finally killing one man. The government wanted him found and killed before it hurt the tourist trade.

Cutler reluctantly accepts help from two men the Captain recommended, they seemed like good men, and they head into the park.

There’s also a poacher in the park taking buffalo heads for mounting and sale to trophy hunters. One of the men with Cutler, a scout, was also a Federal marshal in charge of the park.

The final showdown at the spot of Old Faithful is tense and dangerous when the bear pops up unexpectedly even though they are looking for him.

I’m enjoying the Cutler books almost as much as the two Ben Haas, as John Benteen of course, titles.

A final thought on the cover. The publisher apparently had this one just lying around as it bears no relationship to anything that happened in the novel. Cutler only wears one gun and the book happens in early winter. The team of men use skis to get into the interior.

Next week, I’ll cover the final two books in the series.

For more forgotten books, as always, check out Patti Abbott at her blog, Pattinase, on Fridays.