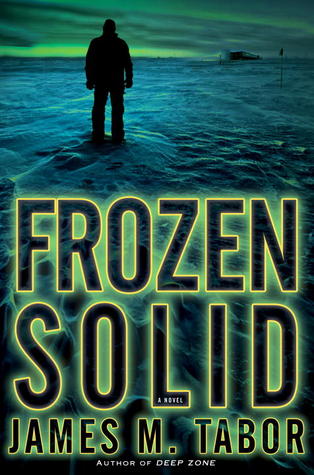 James M. Tabor in just two novels has become one of my favorite thriller writers. Hallie Leland is back in FROZEN SOLID, this time on the continent of Antarctica instead of a two mile deep cave in Mexico. An emergency replacement for an old friend that had died from an accidental overdose of heroin, she had only a few days to get the job done before winterover, that eight month period where nothing gets in or out of the base.

She gets her old friend’s room and doesn’t take long to find the camera hidden in the ceiling. Watching the memory card, it confirms suspicions she already had. That her friend was murdered by a man, who’s face she never sees on camera, and made to look like an accident.

So she’s stuck in a small base with a murderer, she has to retrieve an extremophile, an organism able to live in extreme conditions, from a deep water lake found under a mile of ice, and figure out the murderer’s identity. All without the man she seeks getting the wiser.

Then in short order she witnesses three women die very quickly abnd comes under suspicion of bringing in something deadly from the outside.

A fine thriller that keeps the action constant, the suspicions tense, and the danger to Hallie always up front. 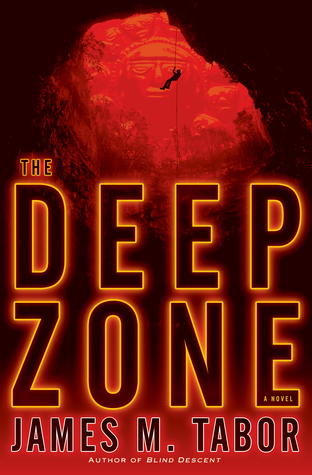 I love a good scientific thriller, so when I saw a blurb that called THE DEEP ZONE James Rollins, a personal favorite, meets Journey To The Centre of The Earth, I knew it was going to be good.

For a first novel, James Tabor sure moves things deftly along, balancing two story lines to keep one flipping the pages. One is a trip by five people into a cave in Mexico, the deepest cave in the world, to retrieve more biological material for an antibiotic that might cure a new disease that had popped up in Afghanistan, hitting wounded soldiers with a ninety percent death rate. The second is on the surface, a shadowy organization eliminating anyone with knowledge of this new disease and making plans to seize this biological material as soon as it reached the surface.

Microbiologist Hallie Leland is called back by the very organization that had fired her a few years before, accusing her of selling secrets to a private company. Framed, no one would listen to her, and she was shoved out the door, a research scientist no longer, just to avoid the embarrassment of a prosecution.

Now they need her.

She had been in that cave before, leading the expedition that brought the mold-like material found deep in the cave that had produced the new antibiotic.

She’s leading the new team into the dangerous cave. Two men, experienced cavers, had disappeared without trace on that first expedition. They don’t expect all of this team to make it out either. All five were recruited because they were single with no children.

Another problem with the cave is that the area is now controlled by drug traffickers in constant battle with the Federales, they not much more honest than the drug people.

That line comprises the main part of the story as the team negotiate a five hundred foot cliff, ease around a lake of sulfuric acid, work through a flooded tunnel.

Based on this first novel, we have some great books to look forward to from Mr. Tabor over the next few years. THE DEEP ZONE will be released tomorrow and can be ordered HERE.