As seems usual with films in the spaghetti western genre, multiple titles, 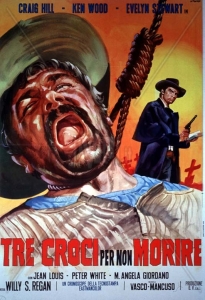 depending on the release, was the norm. In the U.S., this one appeared under NO GRAVES ON BOOT HILL as well as the one heading the post. The director of this one was Sergio Garrone, the fifth Sergio to play the director role in a Euro western. His reputation seemed to vary among disparate reviewers. It was the second Garrone effort after The Outlaw Rider. It’s considered a minor gem in the genre by some, myself among them.

The three of the title are Jerry(Craig Hill), a lothario caught putting the moves on another man’ wife, Paco(Pietro Tordi, billed as Peter White), a sneak thief caught stealing a horse), and Reno(Giovanni

Cianfriglia, billed as Ken Wood, a bounty hunter picked up after killing three men trying to do the same to him. Each time we see a bald headed priest making notes in a small book.

They are locked in a cell with a well-dressed young Mexican man plagued by nightmares. Francisco Ortega(Giovanni Ivan Scratuglia) is scheduled to hang for murdering a father protecting his daughter’s honor. Caught standing over them with a gun in his hand, he maintains his innocence. In a dream sequence we see them murdered, never catching who holds the gun. His father and lawyer deliver the bad news. Clemency has been denied and the hanging will go 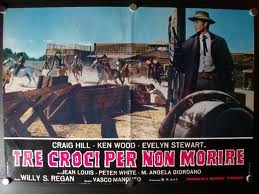 ahead in ten days.

Later that night the three find their cell door unlocked, no guards around. Each succeeding door is unlocked until the last one. A door to one side opens and when they come through find the boy’s father. lawyer, and the priest we kept seeing. They are offered a deal. Prove the boy’s innocence in time and thirty thousand will be theirs. A bank draft is handed over, but can only be used if innocence is proved. Jerry tears it into three parts, so no one will be tempted, and gives his two partners a piece. 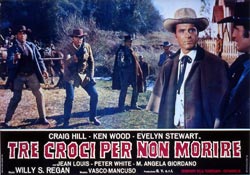 But the real murderer doesn’t want to be found. An earlier investigator has already been murdered and the three have to deal with a rigged lunch party for horse thief Pabo, followed by a mexican gang out to kill them. Paco knows them and as the leader is dying says they were paid a thousand dollars to kill them. 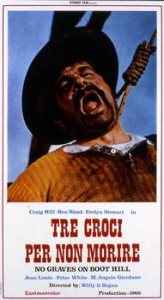