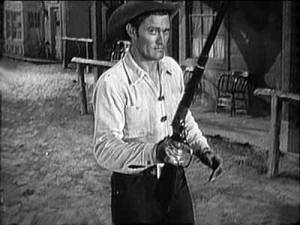 As a kid of the fifties, THE RIFLEMAN was a particular favorite. I mean, there was a kid in it about my age doing things I desperately thought I wanted to do in that period. An honest to gosh cowboy, riding horses and everything.

Though I wasn’t aware of it at hat time, Sam Peckinpah was a young writer cutting his teeth on many western series during that period, one of which was The Rifleman. I’ve seen a number he wrote for the show since ME-TV has been running them twice a day. The two parter below, caught recently though, was written by actor Robert Culp.

The third episode is DEATH NEVER RIDES ALONE and guests future spaghetti western star Lee Van Cleef as an old friend of Lucas, a gunman who wants to retire to a quiet place.

I’d heard a lot about this film, but had never seen it until this morning. It teamed two of my favorites from I Spy, Cosby and Culp, as a pair of aging private eyes beset by money troubles, spousal problems, and alcohol in this 1972 film. Early in the picture, they are trying to decide whether to pay the phone bill or their answering service.

Then they seem to get an easy case that will pay well: a foppish man named Rice wants them to find his girl friend. He doesn’t bat an eye at their price, two hundred a day plus expenses, giving them five hundred as a retainer, as well as a list of her known acquaintances. The first one is dead and things go down hill fast, soon turning into something more as they are besieged from all sides: a trio of hoodlums(one of them Bill Hickman, the Charger driver in the Bullitt car chase), black militants, Chicanos, not to mention the police, who, as usual in PI tales, threaten them, the least of which is license removal. When a family member dies at the hands of the hoodlums, the pair go after the killers, not letting up as they bull their way through to what it’s all about: four hundred thousand in stolen thousand dollar bills.

A pretty violent film, written by Walter Hill and directed by Robert Culp, this is one I wouldn’t mind owning. What I’ve found is that only one DVD, a pretty bad transfer, has ever been available. Likely not an official release, one reviewer said it looked like a third or fourth generation dub from a VHS tape. Prices on the ‘net, even for VHS tapes run over a hundred dollars.