CEMETERY WITHOUT CROSSES(alt. title THE ROPE AND THE COLT) was a 1969 spaghetti western directed by and starring Robert Hossein. a French actor. It was his only venture into the genre. Spaghetti Western Database lists it as number seventeen of the twenty essential films in this particular sub-genre of western films. I’ve seen nineteen of them. How many have you seen? The script was by Hossein and Claude Desailly. A number of places give Dario Argenta a writing credit, though Hossein maintains he had nothing to do with it.

As the film opens we see three men being pursued by a larger pack. One is obviously wounded, Eventually the other two split off and the third is followed to his home. His name is 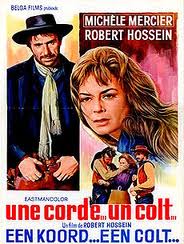 Ben Caine and, in front of his wife, Maria(the female lead Michele Mercier), he’s hung, despite her pleading.

They are the Rogers family, the head, Will Rogers(Daniel Vargas), and his three sons, along with a few riders. They are the most powerful ranchers in the area, known, or suspected rather, of rustling. They had indeed stolen the Caine herd and the three Caine brothers, Ben, along with Tom and Eli, had went after them. To late to get the herd, they had stolen the money it sold for. The Rogers also had the local law in their pockets.

Leaving the widow alive turns out to be a mistake. She wants revenge and goes to an old lover for help. 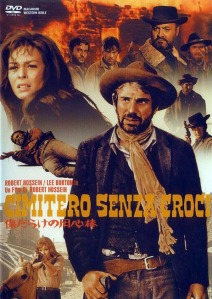 Manuel(Hossein) lives alone in a ghost town. He refuses to help her, apparently giving up violence, refuses to do it for money, refuses to do it because Ben Rogers had been a friend(we see an old photo of the three of them together). He gradually comes around after Maria leaves and heads out.

While checking into the local hotel, he sees one of the Rogers brothers throw a prostitute from his room without paying. That gives him a way into the Rogers house as, later in the saloon, three men come in and accost the Rogers brother, at the prostitute’s urging, tying his hands behind and starting a beating. A head butt to one gets a gun drawn and that’s when Manuel steps in, killing all three in the blink of an eye, then walking out of the saloon.

Before I go any further, I must comment on Manuel’s gun style. Left-handed, he wears his gun on his right hip, butt forward. Not sure why, but he always pulls a black leather

glove on his right hand, which he never uses, whenever he expects gun play, then removes it, storing it in his right jacket pocket.

He’s waiting calmly in his hotel room when the sheriff and two deputies come to arrest him for murder. He’s only locked up long enough for the Rogers brother to ride to the ranch, get a ladder from Will, and get it to the sheriff. Rogers offers him the foreman’s job, twenty-two a month plus food and lodging, which he accepts. Later that night, he’s wandering around the ranch when he’s stopped by a guard near the corral, being advised that the boss didn’t like anyone around the horses. “Fine, I’m going to bed,” just before attacking the man. 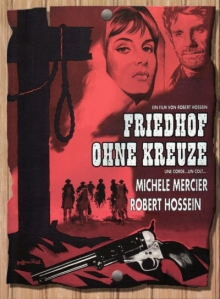 Then comes the strangest scene in the movie. The dinner scene. The long table was filled with men, maybe twenty, twenty-five, along with Manuel, and one woman, Rogers’ daughter. Manuel, as he eats, notices everyone staring at him, including the servants. It gets right odd after a bit. No one speaks, just keep shoveling food into their mouths as they watch him. What happens is similar to the old spring loaded snake in a can. Everyone roars with laughter when he launches it. This scene was directed by Sergio Leone according to the Spaghetti database.

The horses are released and driven away, giving him the diversion he desires as the entire Rogers clan mounts up and gives chase. He then kidnaps the daughter and returns to his ghost town, soon to be joined by Maria and her two brothers-in-law. Here we find out Manuel is perhaps not a nice man himself. Maria takes a necklace from the girl and leaves. He

watches as the two Caine brothers take off their guns and go up to the girl’s room. We don’t see anything, but only here her scream. Later, she lying on the bed, clothes ripped, and I think we know what happened.

Maria simply wants the Rogers humiliated. The necklace is her ticket. She forces Rogers and his sons to accompany her husband’s hearse, then bury him, all of them filling in the dirt.

The showdown at the end has a twist I didn’t see coming.

The characters here drank their coffee from bowls instead of mugs. Apparently a French convention that I wouldn’t have known of if I hadn’t ran across it in another review.

Sergio Leone was reputed to have a part in the film as the hotel clerk when Manuel checks in. It definitely wasn’t Leone in the Youtube film I saw. But his performance was reviewed somewhere by someone and when it was revealed that Leone wasn’t it the picture, that reviewer said it must have been a bad print he saw. He maintains everyone he spoke to said Leone was in that role. For that reason, some suspect that Leone was actually filmed, then replaced by another actor. Does that reflect on Leone’s acting talents? Who knows?

I have to say the movie looked unlike any other spaghetti western I’ve seen. Oh, it had that bleak landscape you see in a lot of them. Filmed in Spain, it was mostly naked dirt

with a few scrubby bushes here and there and only a couple of puny trees. That distinctive sound of gunfire we all know and love was not there. And the violence was not nearly what I’ve seen in most other films of the genre. Manuel killed only a handful of men, seven I think, and there was maybe another half dozen.

One final thought on the horse Hossein rode. A beautiful white animal, it was either his own or well trained. In one scene near the end, he jumps ff and goes looking for amria, the horse walking behind him.

A pretty good film I thought.

Here’s the trailer, in Italian, and below that a link to the film if anyone cares to watch it.