Lt. Commander Aden Pendar thought his whole future was laid out. As First Officer of the Hyrathian warship Ryzell and the son of a Duke, expected his coming evaluation would earn him a Captain’s rank and his own ship. The plan then was to ask the Queen for her daughter’s hand in marriage, securing his rise in power.

The alliance declared war against Hyrathia over their claim to the planet Kavil and his captain told him, while technically proficient at command, he wasn’t ready for a captaincy. He had no people skills when it came to dealing with the crew. That would come in time.

And the war began going badly for Hyrathia. While no other race could stand up to them, the combined Alliance was getting it done.

Hyrathia’s salvation lay in a ship that had disappeared twenty years before. The Dragon had had a new weapon system that laid waste to an enemy, giving Hyrathia victory, then the scientist that had developed it, had flown off without a word. No one knew where or why. It had not been seen, found, since.

Aden’s new mission was to take a handpicked crew, find the lost Dragon, and save Hyrathia from being wiped out.

But there was much more going on Aden was to learn.

Space opera by one of the finest young writers going today. Release date is April 7th.

Mike Resnick edits the Stellar Guild series and the idea is to pair a long established SF author with a younger, newer writer of his choosing. Together they write a pair of similarly themed novelettes. This one is a bit different in that Resnick had one writer in mind and Niven another.

They take an old tale by Niven, FLASH CROWD, and have the two writers write tales based on it’s themes: which is an examination of the political, economic, and social changes of a teleportation system. Niven expands and updates his story(the new version mentions Wi-Fi and the BP oil spill in the Gulf for example), the title becoming RED TIDE, then writes his own new story for the book.

Other established authors participating in the project include Kevin J. Anderson, Mercedes Lackey, Harry Turtledove, Robert Silverberg, Nancy Kress, & Eric Flint. Most of the younger writers I wasn’t familiar with, part of the reason for the series, to introduce them to a larger audience. I suspect I will begin picking the first six books up as I go along. RED TIDE can be ordered here. 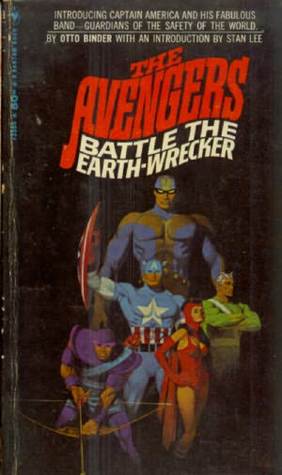 The Binder brothers, Earl and Otto, were SF writers in the early days of the sf pulp era. They wrote together under the pen name Eando Binder. Their most famous work is probably I, ROBOT, the story of Adam Link, an intelligent robot accused of murdering it’s creator. It was filmed twice on two versions of the series Outer Limits. The sixities version starred Leonard Nimoy as a journalist covering the trial and the nineties version again starred Nimoy, this time as Adam Link’s lawyer. I covered the collected stories, Adam Link, Robot a few years back.

By 1939, Earl had retired from writing and was his brother’s literary agent.

THE AVENGERS BATTLE THE EARTH-WRECKER can only be described as pure pulp, the last book Otto had published. It was in 1967.

it concerned the Avengers Battle with Karzz The Conqueror, an alien from 5000 years in the future who was out to destroy Earth. Humans in his future had thwarted the alien’s armada and he wanted to destroy the planet before they achieved their future supremacy.

Despite the cover, Quicksilver and the Scarlet Witch are described in a TV program at the beginning as former Avengers. It was actually Goliath and the Wasp in the narrative.

In The mid-sixties when I was a teenager, the Agent of T.E.R.R.A. books started appearing. They were the adventures of Hannibal Fortune and his alien, shape-changing telepathic partner Webley. Shortly I received contact with the author’s daughter, Sabrina Jardine, who helped me clear up a few misconceptions, while also informing me that Webley had appeared previously in a series of stories in the British science fiction magazine NEW WORLDS. Those three tales recently became available in ebook format.

Earth has had interstellar travel for fifteen years when Bil Grant meets Webley, the alien shape-changing symbiote disguised as a cat(his most frequent appearance.

Both are out of work and decide to team up. They set up Creatures, Incorporated, a travel agency that assists aliens visiting Earth in quarters, finding food, money exchange, tourist spots, that sort of thing.

In this one, a completely unknown alien has been captured and no one can talk to it. It’s up to Creatures, Incorporated to save the day

Webley and Bill Grant, as well as their new secretary, have a slightly different

problem this time around. They are visited by a Kobabra, an eight foot tall alien that looks like a bird. Johrkoll is his name and he’s lost everything. His passport, his identity papers, and all his money.

He needs, first, to be able to prove his identity, get the proper papers, and a job. The paperwork will be tough because no proof of I.D. Johrkoll is quite an accomplished singer on his home world. Unfortunately, his register is to high for human ears.

A tough task for Creatures, Incorporated. 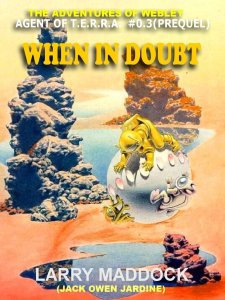 Creatures, Incorporated has a pair of problems. An Aldebaranian priest, an eight foot tall grasshopper, named Kaara needs a job. He’d come to Earth on vacation to check out Earth religions. He’d misfigured his funds and was flat broke.

The second trouble was the Mantashi, slug-like aliens hired out for a tunnel project. Excellent diggers, they also secreted a slime that hardened, reinforcing the walls. The trouble started when they sent a seventh Mantashi to help. The aliens promptly stopped work and dug a side room where they all disappeared into. The project was time sensitive and a big bonus could be lost if they couldn’t be got back to work quickly.

It took the Aldebaranian priest to put them on the right track.

The varied works of Larry Maddock are available at Amazon

Author Chris Beckett offers us a science fiction tale loaded with religious references and still comes up with a superior novel. Start with the name of the planet, Eden, with five hundred-thirty-two humans living in the circle valley, all descendants of one couple, Tommy and Angela. They have a set of laws that they live by as well.

Eden has no sun. Light and heat come from the the trees they call Red lantern and White lantern. They live in a small valley and are slowly descending back to more primitive levels as they wait for Earth to come and take them home. The language has started to change too.

Each year Any Virsry is held where births and deaths are tallied, the momentoes are displayed(the models carved by Tommy of a car, a building, and a starship are displayed). They recount things told by each generation of Earth where the light comes from the sky, something called Lecky-trickity powers everything, and planes fly through the air like birds. Sex is rather open, they call it slipping, with any female, oldmum or youngmum, taking the male of their choice.

This year’s Any Virsiry, the one hundred sixty-third, is held as always around the Circle of Stones, the spot where the landing veekle that brought the five first set down, memoralized by a circle of stones with five in the middle, signifying the Three Companions and Tommy and Angela. It has become a religious site where no one but the Council can get within three feet, let alone touch them.

One dares to speak out, defying the leaders.

John Redstone, a newhair, is fifteen years old< as the Oldies reckon, or twenty wombtimes as thew young ones think of it. He knows hunting food is getting tougher(School was abolished at Any Virsry one forty-five because they needed the time for hunting). They eat meat that just a few years before they would never have considered.

John is different from most of his peers, even the older ones. He knows something must be done. They must find other living valleys(they know from stories told and retold that more lighted areas were seen as the police veekle came down. He faced down and killed a forest leopard with a boy's spear rather than climb a tree until it went away.

He's castigated for even suggesting spreading out. It's infernally cold and dark around Circle Valley, and besides, no one has ever done such a thing!

The bulk of the novel takes place after he breaks a number of Family laws and is banished. Ho one is allowed to speak of him or to him. He's soon joined by others and set out to find new lighted valleys.

What they finds revelas some uncomfortable truths and he's pursed by one of his relatives and a number of sycophants who are gradually taking Family over once John upset the apple cart.